India aims to be world’s top 3 economies in next 15 years, says Modi 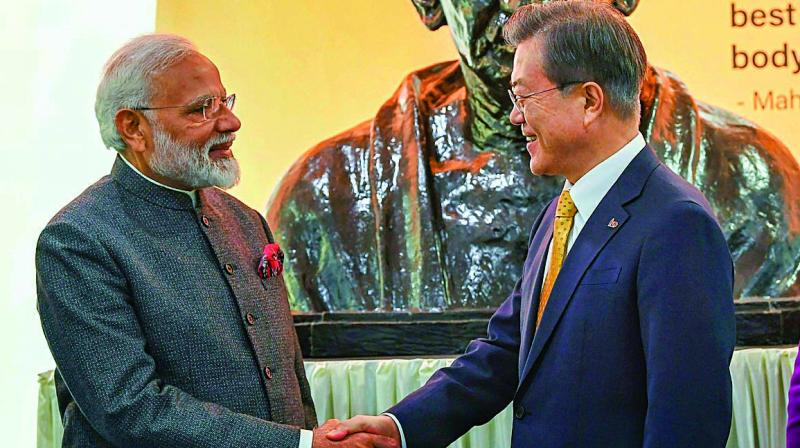 PM Narendra Modi and South Korean President Moon Jae-in after unveiling the bust of Mahatma Gandhi at the Yonsei University in Seoul on Thursday. (Photo: PTI)

Seoul: Prime Minister Narendra Modi on Thursday said India is on the way to becoming a $5 trillion economy soon and hoped that the country would be among the world’s top three econom-ies in the next 15 years.

Addressing the Indian diaspora here, the Prime Minister recounted several steps taken by his government in recent years, including several new initiatives like the Goods and Services Tax (GST), MUDRA initiative, to take India on a forward trajectory. He said that India is the world’s fastest-growing major economy.

Today, India’s economy is on the 6th position and it will not take time to reach the 5th spot, Mr Modi said.

“It is our endeavour that India finds a place in the top three economies of the world in one-and-a-half decade,” the Prime Minister said.

“In Korea, you people not only celebrate all Indian festivals like Holi, Diwali, Baisakhi but you also involve your Korean friends in celebrations.

“Now Indian restaurants have started finding place in Korean cities. Indian dishes are also being included in the menu here. Even Korean people have started knowing what is the meaning of a particular Indian dish,” he said. Mr Modi said that Indian movies are becoming increasingly popular in Korea.

“Now we can also hear the voice of Kabaddi-Kabaddi among the Korean children. In 2018, Korean team won Kabaddi’s silver medal in the Asian Games. I congratulate all the Korean people for this feat,” he said.

“I have already said that only one person can be the ambassador (Raajdoot) but every Indian, regardless of the place he lives in, is the country’s representative (Raashtradoot). You are all India’s ambassador,” the Prime Minister said.

India’s pride has increased due to the hard work and discipline of 30 million overseas Indians, he said.