Donald Trump's doppelganger says he has come to Hanoi to meet with a Kim Jong Un lookalike to end North Korea's nuclear ambitions. 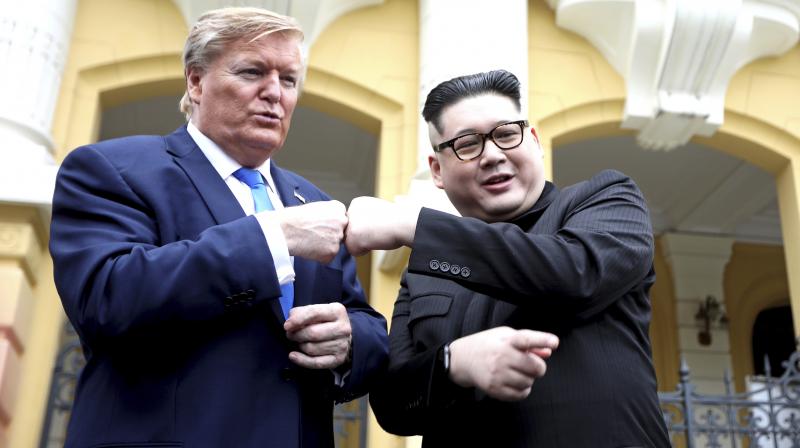 White and Kim impersonator Howard X are in Hanoi days before a meeting between the real leaders of the United States and North Korea. (Photo:AP)

HANOI: Heavily bronzed and freshly coiffed, Donald Trump's doppelganger says he has come to Hanoi to meet with a Kim Jong Un lookalike to end North Korea's nuclear ambitions, and maybe play a bit of golf.

"We're working toward peace. Through negotiations, with dialogue, we want to help North Korea of course," said Trump impersonator Russell White, in a sharp suit and blue tie.

White and Kim impersonator Howard X are in Hanoi days before a meeting between the real leaders of the United States and North Korea, who will hold a second summit in the Vietnamese capital on February 27-28.

Though the agenda for the planned summit has not been released, Howard X says he has a few aims for his pow-wow with the fake Trump.

"Hopefully he can overlook all my nuclear missiles and lift the sanctions," said the full-time impersonator, who also visited Singapore ahead of the leaders' meeting last year.

The men have a few non-official agenda items this week too -- maybe a massage parlour, a round of golf and hopefully a chance to try some of Hanoi's culinary delights.

Out of character, the pair say they can make good money as impersonators -- as long as Kim and Trump are in the news.

"The good thing for Kim is he's always doing something interesting, also Trump," said Howard X, who charges a minimum of $3,500 for an appearance and says he once walked away with $15,000 for a gig.

But the work can be burdensome.

While White takes 20 minutes, Howard takes three hours for the make up

Howard X says it takes him three hours to perfect the Kim look: carefully manicured hair, thick black glasses and suits from a top tailor in Hong Kong where he is based.

Though he's mastered the get-up, he's not entirely happy about it.

"Mr Kim please get a proper haircut, this sucks," he said, standing on the steps of Hanoi's colonial-era Opera House with black-clad bodyguards and a swarm of media.

As for White, it only takes him 20 minutes to bronze his face -- excluding his under eyes -- and gel his blonde hair to look like the man he says is doing a great job.

The pair say they are looking for a few more impersonators to complete their band of "tyrants", calling for any lookalikes of Russian leader Vladimir Putin, China's Xi Jinping or Brazilian President Jair Bolsonaro to come forward.