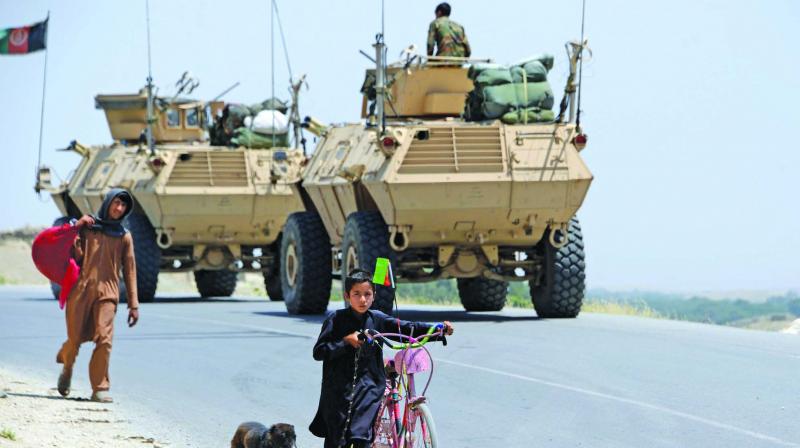 Afghan children walk past security force personnel as they leave a village during an operation against ISIS in Chaparhar district of Nangarhar province. (Photo; AFP)

Kabul: A German aid worker and an Afghan guard were killed and a Finnish woman kidnapped as gunmen stormed an international guest house in central Kabul, officials said on Sunday.

No group has so far claimed responsibility for the attack late on Saturday on the guest house run by Swedish charity Operation Mercy.

In further violence roiling the country, 20 Afghan policemen were killed early on Sunday when Taliban fighters stormed their outposts in the southern province of Zabul, as the insurgents escalate their annual spring offensive.

The interior ministry confirmed the brazen Kabul attack, the latest in a series of assaults on aid workers in Afghanistan.

“A Finnish lady was kidnapped from police district (three) last night at 11.30. A German lady and an Afghan guard were killed,” ministry spokesman Najib Danish said on Twitter.

Authorities in Helsinki confirmed that a Finnish citizen had been kidnapped, adding they were investigating the incident in coordination with their counterparts in Kabul.

“At the moment, the identity of the kidnappers is not known. Finland urges immediate release of the kidnapped person,” the Finnish foreign ministry said in a statement.

“We know that she’s missing, we will send out a press release later,” he said in a brief statement.

Operation Mercy works with local communities in areas such as reducing infant mortality and women’s empowerment.

The kidnapping of foreigners has been on the rise, but the threat is even greater for Afghans.

The violence underscores the worsening security in Afghanistan, which is in the grip of an insurgency waged by the Taliban and other groups.

The Taliban claimed responsibility for the coordinated attack in Zabul’s Shah Joy district, another stinging blow to Nato-backed Afghan forces.

Local officials made desperate calls to TV stations as they were unable to get hold of senior authorities to seek help, highlighting the disarray in the ranks of security forces.

A district official told AFP that at least 15 others were wounded in the fighting. Insurgents also mounted rocket attacks on the governor’s office, the police headquarters and an army brigade in the provincial capital Qalat, officials said.

The insurgents’ strength is growing more than 15 years after they were toppled from national power by the US-led invasion of 2001.

Taliban fighters dressed in army uniforms and armed with suicide vests attacked a military base outside the northern city of Mazar-i-Sharif last month, killing at least 135 policemen and soldiers.

Taliban militants launched their annual “spring offensive” in late April, heralding a surge in fighting as the US tries to craft a new Afghan strategy and NATO considers sending more troops to break the stalemate.

Aid workers in particular have increasingly been casualties of a surge in violence in recent years. Judith D’Souza, a 40-year-old Indian employee of the Aga Khan Foundation, a prominent NGO that has long worked in Afghanistan, was rescued last July nearly a month after she was abducted near her residence in central Kabul.

Katherine Jane Wilson, a well-known Australian NGO worker, was kidnapped in April last year in the city of Jalalabad near the border with Pakistan. Wilson was released in March this year.