Trump will not be the first foreign dignitary to present a trophy to a sumo tournament winner. 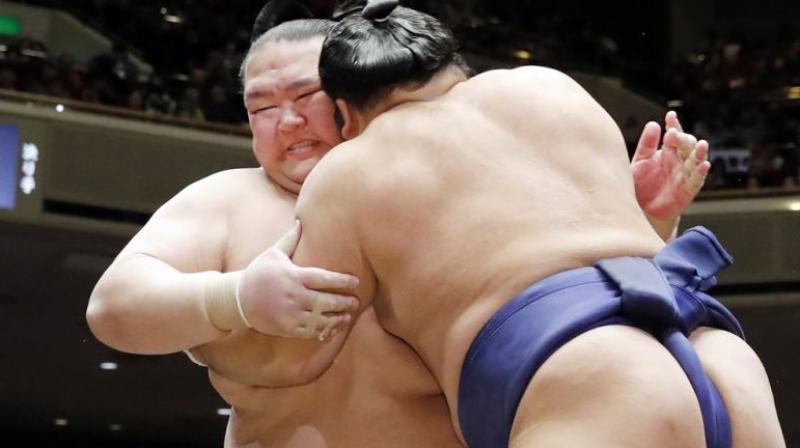 Trump is expected to watch the final three bouts on the last day of the tournament at the Ryogoku Kokugikan venue alongside Japanese Prime Minister Shinzo Abe during his May 25-28 state visit. (Photo: AP | File)

Tokyo: US President Donald Trump can expect a warm welcome from the sumo wrestling community when he presents a custom-made “Trump Award” to the winner of the Summer Grand Sumo Tournament in Tokyo on May 26.

However, with Trump expected to view the bouts from a chair instead of sitting cross-legged on a cushion as ringside viewers typically do, some fans have been left upset at his special treatment.

Trump is expected to watch the final three bouts on the last day of the tournament at the Ryogoku Kokugikan venue alongside Japanese Prime Minister Shinzo Abe during his May 25-28 state visit. Their wives, Melania Trump and Akie Abe, are also expected to attend.

He will present the trophy to the winning wrestler following other awards, the Japanese Sumo Association (JSA) said.

“I’ve always found that fascinating,” Trump said of sumo at a news conference in April.

Some members of the sumo community welcomed the increased exposure that Trump’s visit will give their sport.

“Sumo is Japanese traditional culture. It is not just about winning and defeat. So, it is good that the president is involved and will present a trophy,” said Kazuo Saito, a sumo coach at Nippon Sports Science University.

Saito also doesn’t think the US leader’s presence will affect the wrestlers’ performance.

“I believe that they will compete at their best,” he said.

Trump, 72, will sit in a chair, instead of on a “zabuton” cushion on the floor as is customary.

That has upset some sumo fans.

Masaru Tomamoto, 73, said he sympathised with Trump but nonetheless would prefer the US leader to follow custom.

“I also want to sit on chair as we watch sumo wrestling,” admitted Tomamoto over a steaming bowl of chanko nabe, the stew favoured by sumo wrestlers.

“But if (Trump) watches a Japanese traditional sport, sumo, I think that it would be much better for him to sit cross-legged with the cushion on the floor, rather than on chair.”

Izumi Chiba from Sapporo in northern Japan echoed the sentiment: “As we say, when you are in Rome, do as the Romans do.”

Trump will have to climb onto the ‘dohyo’ – or sumo ring – to present the award alongside Abe. Shoes are typically not worn on the dohyo so he may have to wear slippers or shoe covers.

Almost one-eighth of the 11,000 seats have been reserved for Trump, Abe and their security teams. Ordinary attendees will have to go through security checks, media reported.

Trump will not be the first foreign dignitary to present a trophy to a sumo tournament winner.

Former French President Jacques Chirac, who was known as a big sumo fan, created the President of the Republic of France Cup and presented the trophy to the winning wrestler in 2000. It was presented every year until Chirac left office in 2007.