The bomb tore through a queue of civilians who had lined up outside the bank to collect their salaries ahead of the Eid holidays. 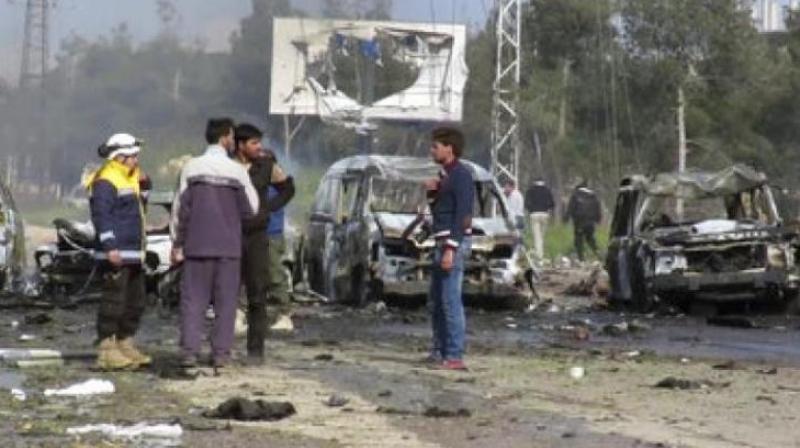 Lashkar Gah (Afghanistan): At least 29 people were killed Thursday when a powerful car bomb struck a bank in Afghanistan's Lashkar Gah city as people were queueing to withdraw salaries, the latest bloody attack during the holy month of Ramadan.

60 wounded people were rushed to hospital after the bombing at New Kabul Bank which upturned vehicles left the area littered with charred debris, and sent a plume of smoke into the sky.

No group has claimed responsibility for the brazen attack, but it comes as the Taliban ramp up their nationwide spring offensive despite government calls for a ceasefire during Ramadan.

The bomb tore through a queue of civilians and government employees who had lined up outside the bank to collect their salaries ahead of the Eid holidays marking the end of Ramadan.

"At least 29 people were killed and 60 others wounded in today's bombing," Mullah Dad Tabidar, head of Bost government hospital said as bloodied victims were rushed in on makeshift stretchers.

Tabidar said civilians and policemen were among the fatalities, warning that the toll could rise further.

In a similar attack in February, at least six people were killed when a Taliban bomber rammed an explosives-laden car into Afghan soldiers who had queued outside a bank in Lashkar Gah to collect their salaries.

For years Helmand province, of which Lashkar Gah is the capital, was the centrepiece of the Western military intervention in Afghanistan, but it has recently slipped deeper into a quagmire of instability.

The Taliban effectively control or contest 10 of the 14 districts in Helmand, blighted by a huge opium harvest that helps fund the insurgency, and has repeatedly threatened to seize Lashkar Gah.

Since they launched their spring offensive in late April, the Taliban have been mounting lethal assaults on the Afghan army and police outposts in Helmand.

Washington is soon expected to announce an increase in the US military deployment to bolster Afghan forces as they struggle to contain the insurgency. American military commanders in Afghanistan have requested thousands of extra boots on the ground.

US troops in Afghanistan now number about 8,400, and there are another 5,000 from NATO allies, a far cry from the US presence of more than 100,000 six years ago. They mainly serve as trainers and advisers.

Pentagon chief Jim Mattis this month acknowledged that America still is "not winning" in Afghanistan nearly 16 years after the US-led invasion toppled the Taliban regime.

Mattis said he will present a new US military strategy for Afghanistan, along with adjusted troop numbers, in the coming weeks to US President Donald Trump.

The Afghan conflict is the longest in American history, with US-led forces at war since the Taliban regime was ousted in 2001.