Deadly fires are not uncommon in Indonesia due to poor safety standards that are routinely flouted, while illegal businesses are widespread. 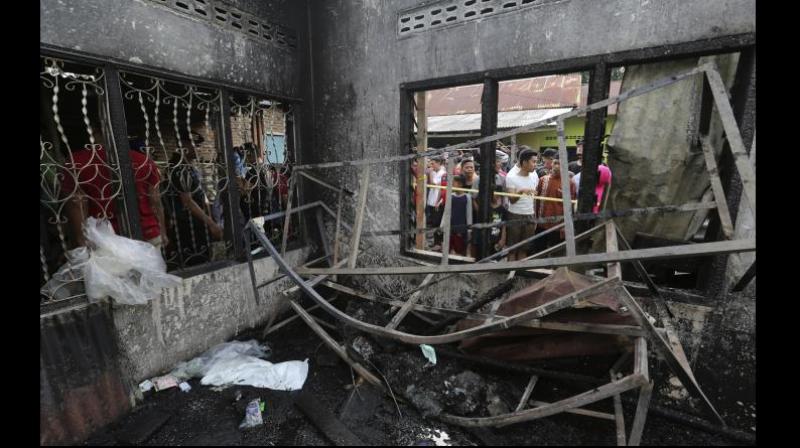 Fire broke out in the factory when a worker was conducting a test for the product. (Photo: File/ AP)

Jakarta: Two people have been identified as suspects by authorities investigating a deadly fire at an Indonesian lighter factory that killed 30 people including several children, a police chief said on Saturday.

A man and a woman, named only as the owner and supervisor of the workshop, were arrested in North Sumatra's capital Medan shortly after the fire ripped through a rented home that operated as a lighter factory in the town of Binjai, about 70 kilometres (44 miles) west of the capital.

Local police chief Nugroho Tri Nuryanto told AFP the pair were being investigated for "negligence" and could face up to five years in prison.

The business was initially reported as a matchstick factory but an investigation revealed it was actually producing lighters. Fire broke out in the factory when a worker was conducting a test for the product.

The gas lighter exploded and the panicked worker threw it on a pile of thousands of ready-to-pack products, triggering a massive explosion. Victims trapped inside could not escape because the front door was locked and the fire spread quickly because most of the house structures were made of wood.

Twenty-five workers – all female – died in the accident. Five children – four girls and one boy – also died in the blaze. All victims were local residents who lived near the factory while the owner and supervisor only came to monitor the business once a month, Nuryanto said.

"We are still investigating why children were allowed to be in such dangerous place and why the door was locked," he said adding police suspected the factory was operating illegally because the suspects could not provide any documents to prove the factory has the necessary permits.

One of the four workers who survived – because they were outside during the incident – said that the children were visiting their parents who worked at the site. Grief-stricken relatives have been flocking to a hospital in Medan to have their DNA samples taken for the identification process because all victims were badly burned and hard to recognise.

Deadly fires are not uncommon in Indonesia due to poor safety standards that are routinely flouted, while illegal businesses are also widespread.

This year, dozens were believed to have been killed when an unlicensed gold mine collapsed while, in 2017, at least 46 people were killed and dozens more injured in a blaze that tore through a fireworks factory outside Jakarta.

Seventeen people were killed when a fire ripped through a karaoke bar on Sulawesi island in 2015 and, in 2009, a fire killed 20 people at a karaoke bar in Medan, on Sumatra island.