TransAsia incurred losses of Tw$2.2 billion in the first three quarters of this year, and in October its budget airline V Air folded. 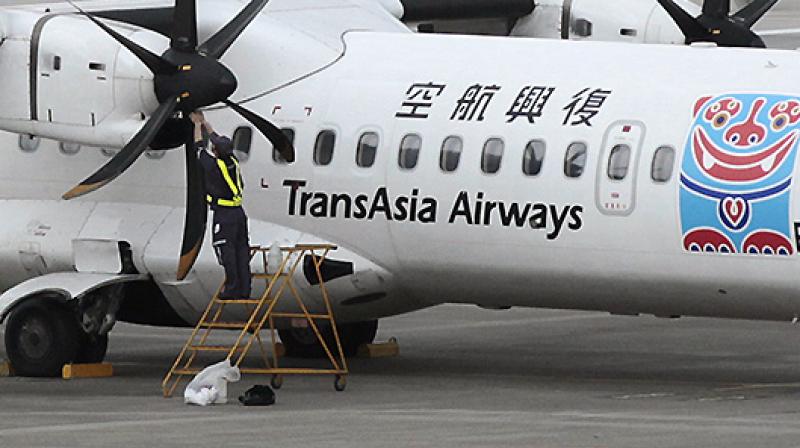 Taipei: Taiwan's troubled TransAsia Airways said on Tuesday the company would be dissolved in the wake of two deadly plane crashes, massive financial losses and an insider trading probe.

Board members reached the decision to close the struggling airline during a hastily called board meeting, with all flights immediately axed.

Chief executive officer Liu Tung-ming bowed in a sign of contrition as he told reporters of the "painful" decision.

"I'm sorry that our recent efforts could not meet public expectations," Liu said.

"The board meeting convened today has approved the decision to dissolve the company and suspend all flights from today."

The dramatic crash of flight GE235 in February 2015 grabbed global headlines as car dashcam footage showed the jet clipping a road bridge and careering into a river shortly after take-off from Taipei, killing 43 people.

An investigation blamed a catalogue of pilot errors, with one found to have mistakenly switched off the only functioning engine after the other had failed.

It came just seven months after another jet slammed into trees and houses near Magong city on Taiwan's scenic Penghu island, leaving 48 dead.

The pilots were flying below the minimum altitude required in poor visibility caused by a typhoon in a procedural mistake widespread among TransAsia's pilots at the time, the Aviation Safety Council said in its investigation report.

Those losses widened to Tw$2.2 billion in the first three quarters of this year, and in October its budget airline V Air folded.

Its woes were exacerbated by a slump in Chinese tourists as relations deteriorated with Beijing under Taiwan's new president Tsai Ing-wen, who took office in May. TransAsia is also now mired in a probe over shares trading.

Chairman Vincent Lin and two executives were questioned by prosecutors early Tuesday after the Taiwan Stock Exchange warned of "apparent" insider trading in Monday's session, as rumours began to swirl that the firm was going under.

Its trading volume on Monday was nearly 27 times higher than on Friday. TransAsia currently operates a fleet of 16 passenger aircraft serving 27 international and domestic locations. It has a staff of 1,795.