Indians among 1,000 foreign workers in Singapore to test positive for coronavirus

This is the fourth day in a row that Singapore has reported a daily increase of more than 1,000 cases 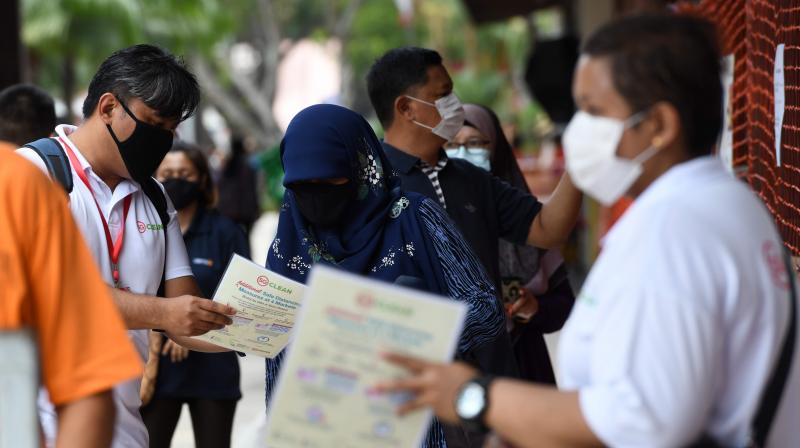 A woman, wearing a face mask as a preventive measure against the spread of the COVID-19 novel coronavirus, receives instructions from a social distancing ambassador at the Geylang Serai wet market in Singapore. PTI photo

Singapore: Battling the second-wave of coronavirus infections, Singapore on Thursday reported 1,037 new COVID-19 cases, more than 1,000 of which are foreign workers, including Indian nationals, mostly working in labour-intensive industries and living in packed dormitories.

This is the fourth day in a row that Singapore has reported a daily increase of more than 1,000 cases.

Twenty-one of the new cases recorded on Thursday are Singaporeans (citizens) or permanent residents who are also foreigners.

The city-state has recorded a total of 11,178 coronavirus infections since the deadly disease broke out here earlier this year. Twelve people have died of COVID-19 related illness.

The vast majority of the new cases are work permit holders residing in dormitories for foreign workers, the Ministry of Health said in its preliminary release of figures.

"We are still working through the details of the cases, and further updates will be shared via the press release that will be issued tonight," the ministry said.

Most of the migrant (foreign) workers who are infected have mild symptoms and none of them is in intensive care.

Twenty-one dormitories, housing most of the foreign workers, including Indian nationals, have been declared as isolation areas with workers at these lodgings quarantined in their rooms for 14 days.

The city-state managed to keep its outbreak in check in the early stages due to widespread testing and contact-tracing, but is facing a fast-moving second wave of infections.