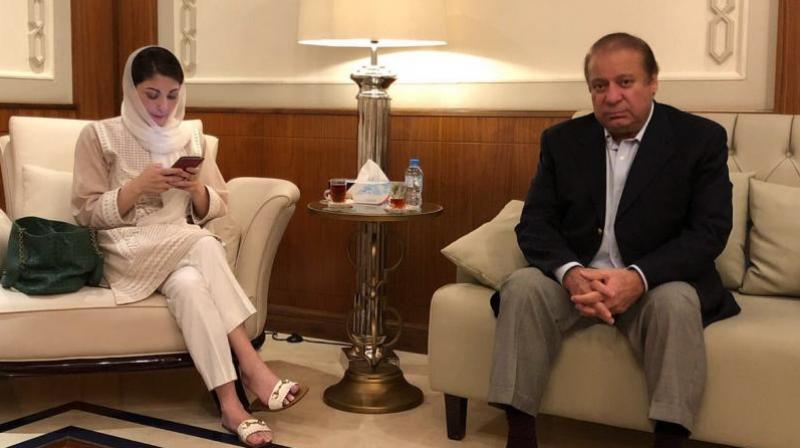 On July 6, Nawaz Sharif and his daughter Maryam Nawaz were convicted in the Avenfield reference case by the Accountability Court. (Photo: File/Twitter)

Rawalpindi: Former Pakistan Prime Minister Nawaz Sharif is reportedly 'on the verge of a kidney failure', and a medical board has urged for his immediate transfer to a hospital from Adiala jail in Rawalpindi.

Sources told The Express Tribune that the urea nitrogen in Nawaz Sharif's blood has climbed up to dangerous levels, his heartbeat is irregular and he is suffering from dehydration and excessive sweating.

According to the report, the hospital in jail does not have a facility where Sharif could be given intravenous fluid. It is necessary to take him to the hospital, and failing to do so could create a situation of emergency at night.

The interim Pakistan government is likely to take a decision soon on the same.

A medical board has reportedly examined Sharif inside the jail on Sunday, The Express Tribune quoted insiders, as saying.

A caretaker government source said that the three-time prime minister has been medically examined on a regular basis in Adiala jail and his medical tests appeared to be normal.

On July 6, Nawaz Sharif and his daughter Maryam Nawaz were convicted in the Avenfield reference case by the Accountability Court.

Also, Maryam's husband, Captain (Retd) Muhammad Safdar was given a one-year sentence without any fine.

The father and daughter were taken to Islamabad by a special chartered flight soon after their arrival at Lahore on July 13, from where they were taken to Adiala jail in Rawalpindi.