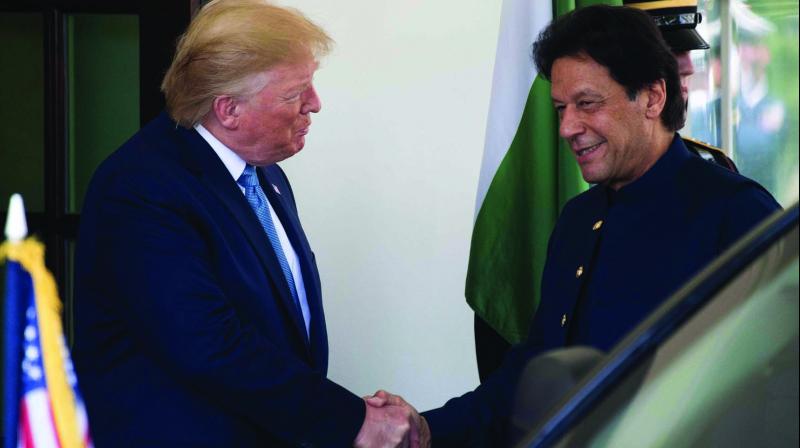 Khan, who is on a three-day visit to the US, underlined in his talks with Trump that, ‘Pakistan would continue to pursue dialogue and diplomacy to resolve longstanding disputes, including the core dispute of Jammu and Kashmir,’ it said. (Photo: AFP)

Islamabad: Pakistan Prime Minister Imran Khan has told US President Donald Trump that normal ties with India would be beneficial for both the countries, asserting that a "peaceful neighbourhood" was a priority of his foreign policy, according to officials in Islamabad.

The meeting between Prime Minister Khan and President Trump at the White House on Monday was the first summit-level engagement between Pakistan and the United States since 2015, according to the Foreign Office (FO).

Khan, who is on a three-day visit to the US, underlined in his talks with Trump that "Pakistan would continue to pursue dialogue and diplomacy to resolve longstanding disputes, including the core dispute of Jammu and Kashmir," it said.

He said that a "peaceful neighbourhood" was a priority of Pakistan's foreign policy, it said. Peace and stability in the region would allow Pakistan to harness its rich human resource potential to generate growth and spur regional connectivity, the FO said. "The Prime Minister said Pakistan was convinced that normalisation of relations with India would be mutually beneficial for the two countries," the FO said.

President Trump also "expressed his readiness to play a facilitating role in resolution of the Kashmir dispute". The two leaders held comprehensive discussions with a focus on building a broad-based and enduring partnership between Pakistan and the US and strengthening cooperation between the two countries to bring peace, stability and economic prosperity in South Asia.

They reviewed progress of the Afghan peace and reconciliation process. "Prime Minister Khan reaffirmed Pakistan's commitment to continue to support the process in good faith. He added that pursuing the process was a shared responsibility," the FO said.

Meanwhile, Pakistan's media on Tuesday gave prominent coverage to Trump's offer of mediation on Kashmir. The readiness to intervene on the Kashmir issue was given prominent coverage, with newspapers splashing it on the front pages.

Dawn newspaper reported that the US President offered to mediate the Kashmir dispute between India and Pakistan. "Trump offers mediation on Kashmir at Modi's request" was its front page headline. The Express Tribune in its headline stated that Trump "offered to mediate on the decades-long Kashmir dispute between India and Pakistan, a move that would signal a shift in long-standing US policy that the issue must be solved bilaterally".

The News International reported that "in a pleasant departure from his past stance, US President Donald Trump said Prime Minister Narendra Modi wanted him to mediate on the Kashmir issue". The Nation also based its main news on Kashmir mediation offer by Trump.