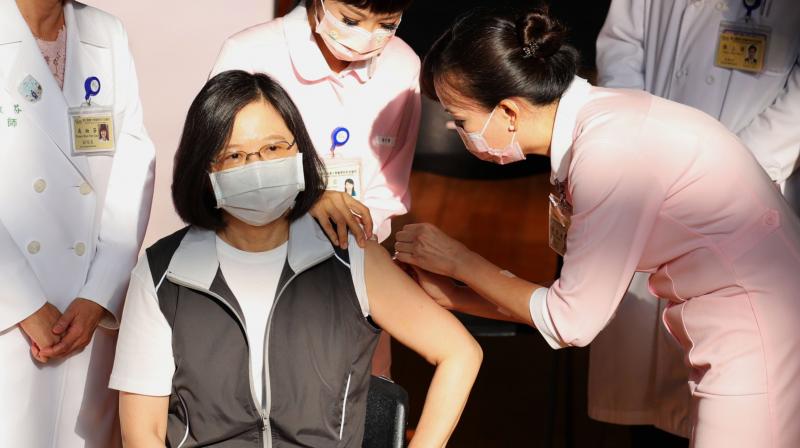 The government has ordered around 16 million doses of AstraZeneca Plc and Moderna Inc vaccines for this year but as yet only around 4 million of them have arrived. (Bloomberg)

Taiwan begins administering its first domestically developed Covid-19 vaccines Monday as it seeks to rely more on local options after struggling to secure sufficient supply of the major international shots.

President Tsai Ing-wen was among the first on Monday to get the vaccine developed by Taipei-based Medigen Vaccine Biologics Corporation. The company is yet to complete phase-3 trials for its vaccine but has been granted an emergency use authorization to begin inoculations.

The move to accelerate its domestic vaccine rollout comes as the economy remains depressed after the government enforced a soft lockdown in May to counter the island’s worst outbreak since the novel coronavirus first emerged. Buying enough vaccines for its 23.5 million population has proven a challenge, and only 3% of the population was fully vaccinated as of Wednesday, according to data from the Centers for Disease Control -- one of the lowest rates among developed economies worldwide. Just under 40% of the public has received one dose.

It remains unclear whether a significant proportion of the public will agree to get the Medigen shot, and Tsai’s high-profile public vaccination is meant to encourage uptake. The government has ordered 5 million doses from the company in total with just over 600,000 available starting from Monday. All but 30,000 have already been allocated to recipients.

The Medigen technology is a recombinant protein-based vaccine similar to the one developed by Novavax Inc., which was shown to be 90% effective in a nearly 30,000-person trial in the U.S. and Mexico.

The company says the vaccine has generated a level of antibodies more than three times higher than those elicited by the AstraZeneca vaccine and also exceeded a threshold mandated by Taiwan’s health authorities.Antibody levels are seen as a proxy of a vaccine’s ability to fight the virus but do not equate to actual efficacy. Large clinical trials are the only way to determine if an experimental immunization helps reduce the occurrence of Covid among vaccinated people compared with those who are unvaccinated. Medigen hasn’t yet completed its trials.

Doubts remain about locally developed solutions. A panel of experts convened to evaluate Medigen’s emergency use authorization in July. Out of the 20 experts who voted, two declined to approve the vaccine, according to a statement from Taiwan’s Food and Drug Administration.

The government has ordered around 16 million doses of AstraZeneca Plc and Moderna Inc vaccines for this year but as yet only around 4 million of them have arrived. The U.S., Japan and Lithuania between them have donated an additional 5.9 million jabs.

Taiwan has been forced to rely on assistance from the corporate and civic sectors to buy vaccines from BioNTech after months of convoluted negotiations proved fruitless earlier this year, with officials blaming the German company’s Chinese distributor, Shanghai Fosun Pharmaceutical Group, for obstructing the deal. Shanghai Fosun denied any wrongdoing and expressed a willingness to sell the vaccines to Taiwan.

A deal was eventually concluded only after Taiwan’s largest company, Taiwan Semiconductor Manufacturing Co., Hon Hai Precision Industry Co. founder Terry Gou and the Buddhist Tzu Chi Foundation offered to step in to act as intermediaries with Shanghai Fosun. Each purchased 5 million doses they will donate to the government.