Saeed had moved the court seeking protection from arrest or action against JuD and FIF ahead of UNSC team visit. 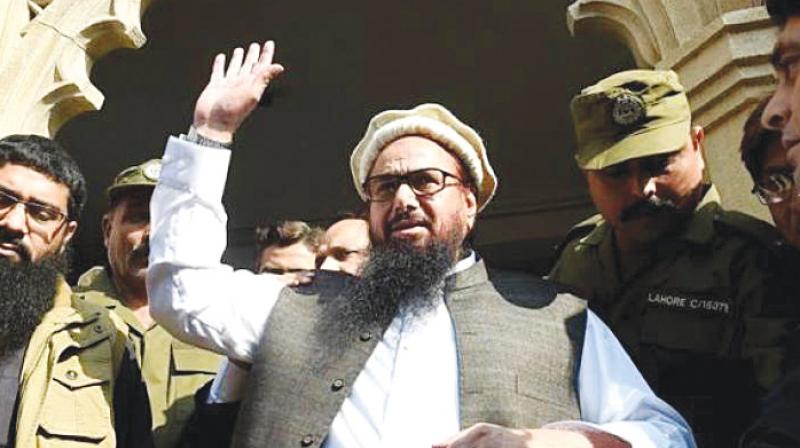 The UNSC team will be visiting Islamabad from Thursday for an assessment of Islamabad's compliance with the world body's sanctions regime (Photo: File/AFP).

Saeed had on Tuesday moved the court seeking protection from arrest or action against JuD and Falah-i-Insaniat Foundation (FIF) ahead of the visit of the monitoring team of the United Nations Security Council 1267 Sanctions Committee.

The team will be visiting Islamabad from Thursday for an assessment of Islamabad's compliance with the world body's sanctions regime.

In his plea, he had said that the government wants to arrest him at the behest of US and India, whose lobby for the last many years has been trying to prove that he was "somehow involved in Mumbai attacks".

Justice Amin Aminuddin Khan heard Saeed's plea and refrained the government from taking any adverse action against him.

He said the court also issued notice to the government to file its reply on March 17.

Appearing for the Lashkar-e-Taiba (LeT) founder, his counsel Advocate A K Dogar told the court that the UNSC delegation was due in the country this week and the government intends to take an "adverse action" against him during the team's stay in the country.

He said the government may arrest his client at the behest of the US and India.

The Punjab government, Dogar said, had detained Saeed for 10 months under the Maintenance of Public Order ordinance but a judicial review board had rejected its application for extending his house arrest in November 2017 as it failed to justify his detention.

Saeed is the founder/chairman of JuD and Falah-i-Insaniat Foundation and he had set up 142 schools and three universities and was engaged in public welfare for a long time, Dogar said.

The UN team's visit is taking place amid increasing pressure on Pakistan from the US and Indian governments with respect to inadequate implementation of the sanctions on Saeed and entities linked to him.

The State Department had said last week that the US had clearly conveyed its concern to Pakistan on Saeed and called for his prosecution "to the fullest extent of the law".

It also said that Saeed's name was on the UN list of designated terrorists.

Saeed was listed under UN Security Council Resolution 1267 in December 2008. The UNSC sanctions list includes the names of JuD, Lashkar-e-Taiba, Al-Qaeda, Tehreek-e-Taliban Pakistan, Lashkar-e-Jhangvi, FIF and other groups and individuals.

The UNSC monitoring committee oversees the sanctions measures imposed by the Security Council under the rules. The member states are required to freeze without delay the funds and other financial assets or economic resources of designated individuals and entities.

Last week, Pakistan banned companies and individuals from making donations to the JuD, the FIF and other organisations on the UNSC sanctions list.

The JuD is believed to be the front organisation for the LeT which is responsible for carrying out the Mumbai attack that killed 166 people. It has been declared as a foreign terrorist organisation by the US in June 2014.