The elegant 52-year-old with long blonde hair has become a passionate spokeswoman for her husband, loudly proclaiming his innocence. 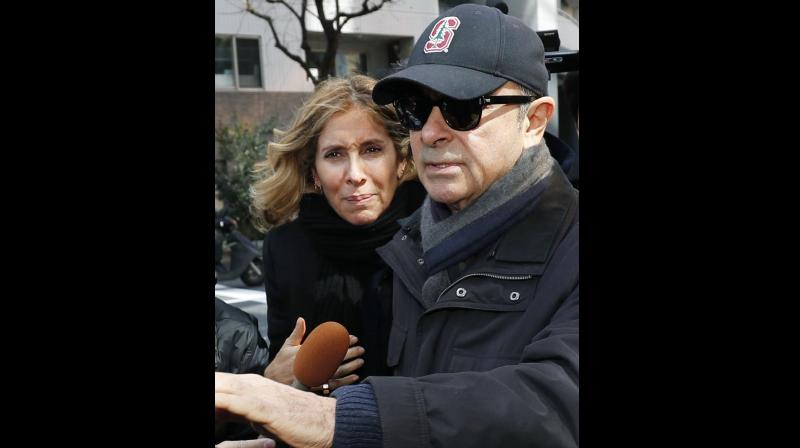 Carole was not with her husband on November 19 when he was dramatically arrested onboard his private jet at a Tokyo airport. (Photo:AP)

Tokyo: Not so long ago, Carole Ghosn was posing on the red carpet with tycoon husband Carlos in front of the world's media, seemingly without a care.

Now she is criss-crossing the world, spearheading an emotional media and political campaign for her detained partner, even as she finds herself increasingly dragged into his legal woes.

The elegant 52-year-old with long blonde hair has become a passionate spokeswoman for her husband, loudly proclaiming his innocence as he languishes in a Japanese detention centre, battling multiple allegations of financial misconduct.

She has appealed to French President Emmanuel Macron to intervene during talks with Japanese Prime Minister Shinzo Abe, saying France should not "abandon" someone who as head of partially state-owned Renault "loyally served his country."

She has also reached out to the White House ahead of Abe's talks with US President Donald Trump, saying Japan's "hostage justice" was designed to break her husband's spirit and force him into signing a confession.

In a tearful interview with US media, Carole said her 65-year-old husband is in poor health, exacerbated by what she described as "mental abuse" in his detention centre.

Carole was not with her husband on November 19 when he was dramatically arrested onboard his private jet at a Tokyo airport and was shocked to learn the news thousands of kilometres away.

She was prevented from seeing her husband during his initial detention and kept largely mum about his case. But she was ever-present after he was released on bail on March 6, setting up home in a relatively modest apartment in central Tokyo.

"During the month he was free, they tried to live normally, go for walks, eat good meals", said a Tokyo-based friend of the couple, despite the phalanx of photographers camped outside their residence -- to Carole's visible annoyance at times.

The respite was brief and Carlos was rearrested at dawn on April 4 to answer further allegations -- an event that "traumatised" her, according to her friend.

She has described that morning in several media interviews, claiming that prosecutors scoured every inch of their 50-square-metre apartment, searched her, took her passport and even accompanied her into the bathroom.

"It was a huge trial, among the worst moments of her life," said the couple's French lawyer, Francois Zimeray, who praised her for her "dignity" under pressure.

Using another passport, she immediately fled Japan for France but returned a few days later to face questioning and to show "she had nothing to hide."

Her friend told AFP: "She has decided to fight for her husband because she loves him and she believes in his innocence. She won't leave him because she knows that for him, his defence is the biggest challenge of his life."

Born in 1966 in Beirut, Carole Ghosn, nee Nahas, has spent most of her life in the US. She holds American nationality along with her three children from a first marriage.

A highly educated businesswoman in her own right, she founded a company selling luxury kaftans at the end of the 2000s and is also involved in charitable and cultural circles.

She met Carlos and the couple fell quickly in love, she providing a calming influence on the impulsive tycoon, according to one friend.

They were married in 2016 at the gilded Versailles Palace near Paris in a lavish ceremony that has since caught the attention of authorities amid questions over how the bash was funded.

As the legal noose tightens around her husband, she has increasingly found herself a person of interest to authorities.

According to sources close to the case, she is named as president of a company used to buy a luxury yacht that prosecutors suspect was purchased partly with funds allegedly diverted from Nissan.

Authorities have questioned her over this British Virgin Isles-registered company "Beauty Yachts" but she has not been formally charged and denies any wrongdoing.

Nevertheless, she has been unable to shake off the Japanese investigators who reportedly suspect her of contacting some of the protagonists in the case to get their stories straight.