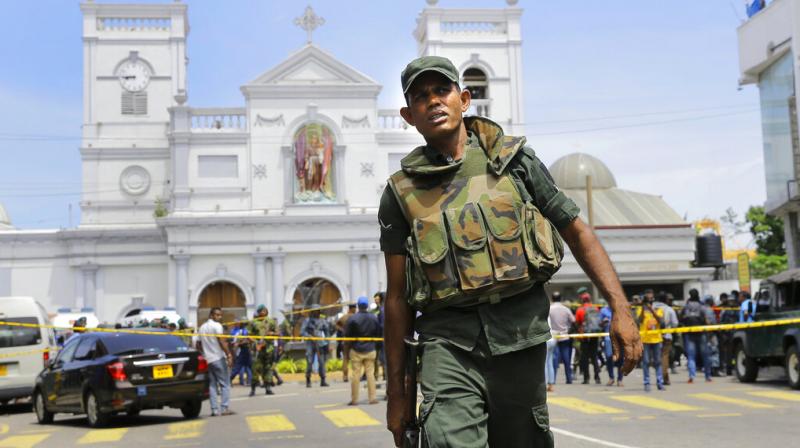 The monk, who heads the Asgiriya Chapter, one the largest and oldest Buddhist chapters in Sri Lanka, went on to call for a boycott of Muslim-owned restaurants, based on rumour that Muslim restaurants served their Buddhist customers food spiked with sterilisation medication. (Photo: AP)

Colombo: Muslims in Sri Lanka say they fear new attacks after a top Buddhist monk called for violence against members of the religious minority, claiming a Muslim doctor had sterilised thousands of Buddhist women.

Activists, politicians and members of the Muslim minority said Warakagoda Sri Gnanarathana Thero's speech last week was to instigate communal tensions after the recent Easter bombings in Sri Lanka. This came weeks after Buddhist mobs attacked scores of Muslim homes and businesses, as reported by Aljazeera.

The riots were an apparent response to deadly bombings on churches and hotels on Easter Sunday that killed more than 250 people and were claimed by the ISIS. Sri Lankan authorities blamed the attacks on two small Muslim groups.

With Sri Lanka still reeling from the wounds of the attacks on the church and the riots that followed soon after – Buddhist monk Gnanarathana unsubstantiated yet repeated accusations that one Muslim doctor in the country had secretly sterilized 4,000 Buddhist women.

"Some female devotees said [people like the doctor] should be stoned to death. I do not say that. But that's what should be done," he said in a speech broadcast on national television.

The monk, who heads the Asgiriya Chapter, one the largest and oldest Buddhist chapters in Sri Lanka, went on to call for a boycott of Muslim-owned restaurants, reinforcing a long-standing and unsubstantiated rumour that Muslim restaurants served their Buddhist customers food spiked with sterilisation medication.

On Saturday, Gnanarathana defended his comments, saying: "The remarks I made are only in line with what the majority are thinking."

Buddhists make up more than 70 percent of Sri Lanka's 21 million population, while Muslims account for 10 percent.

Activists described the comments as hate speech and called on President Maithripala Sirisena to take action, while members of the Muslim community said they feared the monk's comments could lead to new violence against them.

"Somebody of this calibre talking about false accusations and spitting venom like this is highly problematic because at least the younger generation of Buddhist youth is going to take this seriously ... he's inciting violence," Shreen Abdul Saroor, a human rights activist told Aljazeera.

"He's declaring a systematic embargo on Muslim businesses. This is a systematic way of segregating and socially ostracizing the Muslim communities," added the campaigner.

Another Muslim journalist told Aljazeera, "We can't even imagine what could happen to us," he said. "We're afraid the speech will lead to more attacks on Muslims and their properties."

"Most troubling of all is the deafening silence of our president and prime minister in the face of such statements," another woman said.

MA Sumanthiran, leader of the Tamil National Alliance, said the monk's speech "could be an offence to incitement to violence" and that he was "watching to see how the government and the law enforcement authorities will act".

The lack of action against Gnanrathana reflects "the Sinhala Buddhist hegemonic majoritarianism that prevails in the country," he added.