Former Pak President says his party will launch a democratic struggle in Parliament. 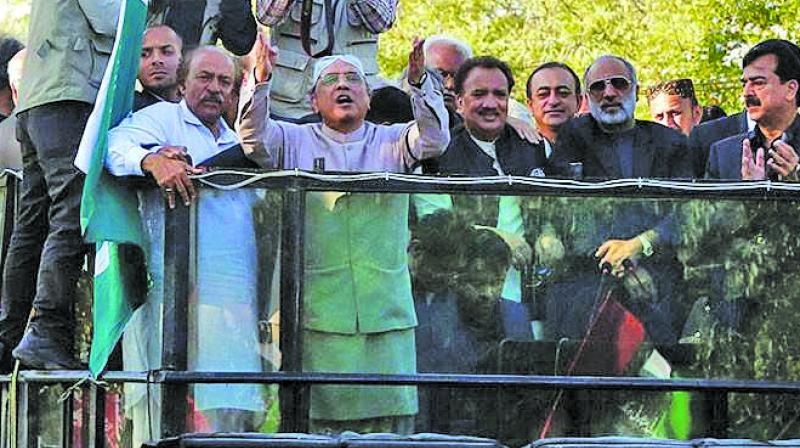 Former Pakistan President Asif Ali Zardari addresses a rally outside the Karachi airport on his return to Pakistan after an 18-month self-imposed exile.

Mr Zardari had left the country in June last year following a hard-hitting speech that criticised the establishment for over-stepping its domain. Since then, he had divided his time between Dubai and London.

The announcement of his return was made by his son, Pakistan Peoples Party (PPP) chief Bilawal Bhutto, who said doctors were allowing his father to travel to Pakistan.

Thousands of party workers and supporters waited for hours outside the airport to greet their party co-chairman.

On his arrival, Mr Zardari addressed a rally outside the Karachi airport. “Jeay (long live) Bhutto!! Pakistan Khappay  (needed)!!” he chanted before starting his speech.

The former President said, “We (the PPP) will now launch a democratic struggle in the Parliament” as the party workers chanted “Go Nawaz Go”.

At the rally, Mr Zardari criticised the ruling Pakistan Muslim League (Nawaz) and said Pakistan leaders were only focussed on developing roads and bridges.

“Pakistan is safe now with the help of the armed forces and the people of Pakistan. Pakistan is a nation that has overcome all challenges. Pakistan is not a country of terrorists,” he added.

The former President said, “We have become a necessity for China. This is beneficial for the country. We will work for the progress of Balochistan, Khyber Pakhtunkhwa, and Gilgit-Baltistan.”

Mr Zardari said, “I have brought a message of hope, not a programme of disappointment. I hope the PPP will once again rise to the helm of affairs in Pakistan.”

He admitted there were some problems on the “western and eastern borders” of Pakistan as well as unrest in Kashmir and the issue of militancy and terrorism.

He voiced support for Kashmir’s right to self-determination. “I want to tell the political actors, who claim I have fled the country, that we are Bhuttos, we will live here and die here. Our bodies will be buried in this soil,” he added.

Extraordinary security arrangements were made in Karachi for Mr Zardari. More than 5,700 security officials, including police and special branch officials, were deployed.

At the old terminal of the Jinnah International Airport, at least 10 walk-through gates and several close circuit television (CCTV) cameras were placed. Mobile vans equipped with special surveillance cameras patrolled the areas close to the venue.