The fire broke out around 3:00 am (local time) on Friday in the engine room of the Barguna-bound MV Abhijan-10 launch 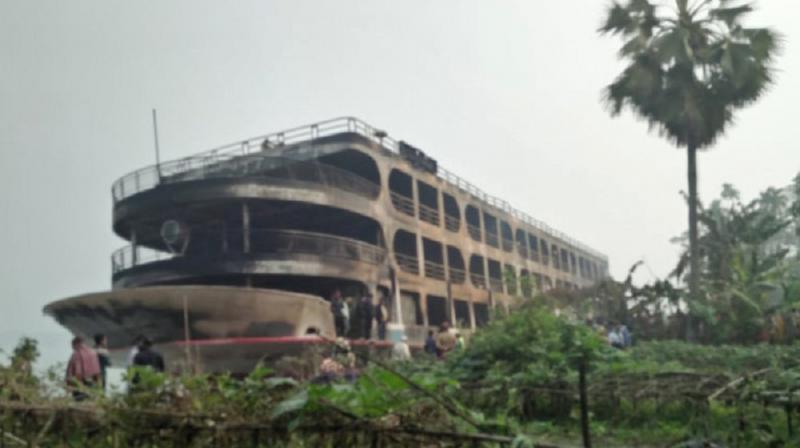 The fire also left over 200 others with burn injuries. (Photo: Twitter)

Dhaka: At least 40 people died and over 150 others were injured early Friday after a packed three-storey ferry carrying around 800 passengers caught fire on the Sugandha River in southern Bangladesh, officials said, in the latest maritime tragedy to hit the delta nation criss-crossed by rivers.

The fire broke out around 3:00 am (local time) on Friday in the engine room of the Barguna-bound MV Abhijan-10 launch that started a journey from Dhaka, police and fire service officials said, adding that scores of other passengers were missing.

"Nine of the bodies were retrieved from the river... 72 passengers mostly with fire wounds are being treated at Barishal Medical College Hospital alone," a fire official told a local television channel.

The television channels, quoting officials, reported that at least 40 people had died in the fire.

A police officer told reporters at the scene that most of the people died from the fire while a few drowned as they jumped into the river after the fire broke out.

"Many passengers were asleep as the fire broke out...Some died from inhaling smoke, some were burnt to death and some drowned, he said.

Witnesses told reporters that the passenger ferry, called launch in Bangladesh, was carrying passengers beyond its capacity and most of them were visiting their homes to spend more time with their families on the extended weekend.

Wailing relatives crowded the bank of the river and the hospital as massive rescue operations were underway.

Another fire official said an investigation was launched into what caused the fire as the passenger ferry was passing by the Jhhalakathi district.

Authorities ordered an investigation to determine the cause of the fire. A seven-member committee has been formed and tasked to submit a report in three days. Rescuers fear the death toll is likely to rise as more passengers have been injured in the pre-dawn fire.

Many passengers jumped into the river in a desperate bid to save their lives as the fire raged for about three hours. Survivors say the launch was packed with passengers, bdnews24.com reported.

Kamal Uddin Bhuiyan, deputy director of the Barishal Fire Service who led the response, said they suspect the fire may have started in the launch's engine room.

"After receiving the information, 15 firefighting units led by Kamal Uddin Bhuiyan, deputy director of Barishal Division Fire Service and Civil Defence went to the scene at 3:50 am and brought the fire under control at 5:20 am," said a fire service control room statement.

"The engine room of the launch suddenly caught fire around 3:00 am and spread rapidly when the vessel was near the Gabkhan Bridge," Saidur Rahman, one of the survivors, was quoted as saying by the Daily Star newspaper.

"There were many passengers including children and elderly. Many of them jumped in the river and were able to swim ashore," he said.

"I caught a burning smell and came out of the VIP cabin to find out that there was a fire. Me, my wife and brother-in-law then jumped in the cold water and swam to the bank," he added.

The accident was the latest in a number of similar incidents in Bangladesh, a small country criss-crossed by a network of some 230 rivers of different sizes and shapes. These watercourses cover nearly 7 per cent of the total area of the country.

An overloaded speedboat allegedly driven by an inexperienced underage boy capsized in Bangladesh after a collision with a sand laden vessel in May this year, killing at least 26 people.

In June last year, a ferry carrying over 100 passengers capsized in the Buriganga river in Bangladesh after it was hit from behind by another ferry, killing at least 32 people. In February 2015, at least 78 people died when an overcrowded ship collided with a cargo vessel.