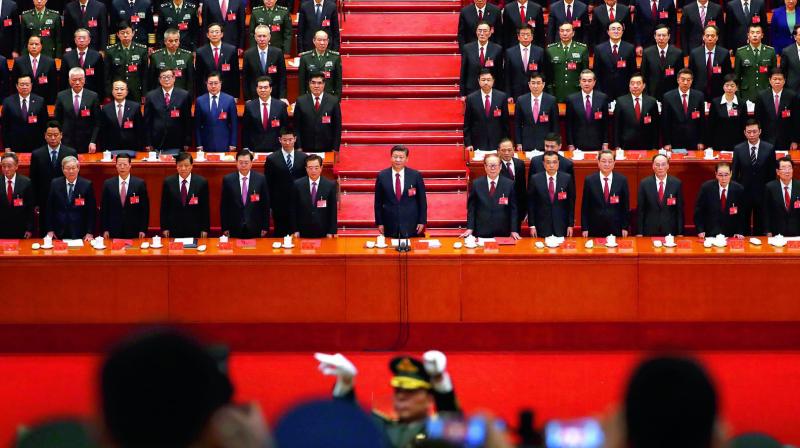 Chinese President Xi Jinping (front row, center) stands with his cadres during the closing ceremony at the Great Hall of the People in Beijing on Tuesday. (Photo: AP)

Beijing: China’s ruling Communist Party enshrined President Xi Jinping’s political thought into its constitution on Tuesday, putting him in the same company as the founder of modern China, Mao Zedong, and cementing his power ahead of a second five-year term.

A key Mr Xi ally, top corruption fighter Wang Qishan, will not be on the new Politburo Standing Committee, the apex of power in China, to be revealed on Wednesday as he was not among those named on Tuesday to the 204-member Central Committee.

Whether or not the powerful Mr Wang would remain on the Standing Committee, which currently has seven members, despite being beyond the customary retirement age of 69, had been among the key questions to be answered at the week-long party congress, which ended on Tuesday.

Mr Wang could still assume another senior role over the next few months. As expected, the party unanimously passed an amendment to include “Xi Jinping Thought on Socialism with Chinese Characteristics for a New Era” as one of its guiding principles. The party will announce its new Standing Committee, headed by Mr Xi, on Wednesday, culminating a twice-a-decade leadership reshuffle.