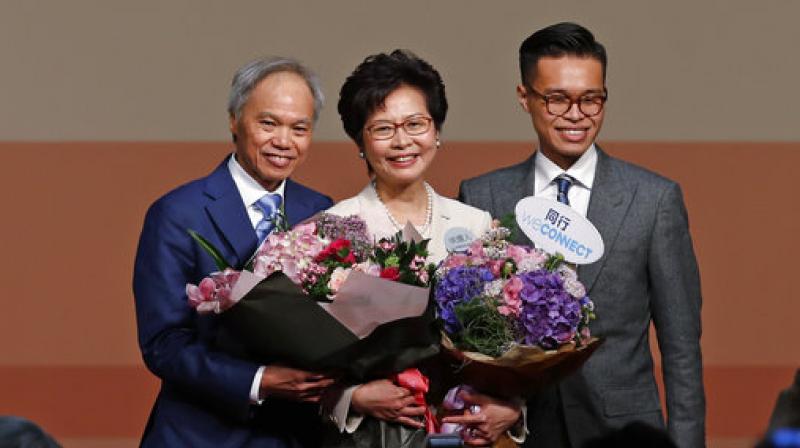 Hong Kong: China-backed bureaucrat Carrie Lamwas on Sunday elected as Hong Kong's first woman Chief Executive who quickly pledged to heal the "divisions" in the gleaming territory which has seen unprecedented demands for democracy and protests at the Communist giant's growing influence.

Lam, 59, won 777 votes from the 1194-member Election Committee, made up of mostly Beijing-loyalists. She is the first woman to be elected to the post.

In Hong Kong, chief executive is not chosen by public vote, but by a 1,200-strong committee dominated by pro-Beijing electors.

Hong Kong merged with Chinese mainland in 1997 under the 'one country two systems' principle worked out between Britain and China. The principle grants certain degree of autonomy from Beijing to Hong Kong which is officially called the Hong Kong Special Administrative Region.

In 2016, pro-democracy activists secured 325 seats on the committee - the highest number ever, but not enough seats to determine the next chief executive.

In the last three years, Hong Kong was beset with divisions over increasing demand for political reform for democracy and independence.

In a sign of continuing divisions, pro-democracy groups today held protests outside the election venue, calling the process a sham.

Pro-democracy activist Joshua Wong, who was among those protesting and was a lead figure in the 'umbrella movement' - rallies calling for fully free elections in 2014 - has called the electoral process "a selection rather than an election".

When the result was announced, he tweeted that Lam had been elected with "only 777 votes".

During the 2014 protests, which were spearheaded by young people, Lam defended Beijing's concessions for political reform.

In her victory address, Lam who will take over the office on July 1 from her controversial predecessor CY Leung, vowed to "heal the social divide" and "unite our society to move forward".

"The work of uniting society and moving forward begins now," she said, but sidestepped questions whether Beijing was behind her victory.

Lam, however said she would "have no fears" to defend the interests of Hong Kong people in front of Beijing, the Hong Kong-based South China Morning Post reported.

She said it would be standard "protocol" for her to call on the Chinese mainland agencies based in Hong Kong, including the central government's liaison office as chief executive-elect.

"It is not to (thank them for their support), but as chief executive-elect, there is some protocol I've to observe. Hong Kong, our home, is suffering from quite a serious divisiveness and has accumulated a lot of frustration. My priority will be to heal the divide and to ease the frustration and to unite our society to move forward," Lam said.

She said she would meet legislators from different political spectrums to work out a mechanism of regular communication.

"I don't expect (the divisiveness to be healed) overnight or within a short time but please give me a chance and give me time. I believe we can find a way out with sincere communication," Lam said, but stopped short of promising to push for universal suffrage for Hongkongers.

"I too want more democracy in Hong Kong, but Hong Kong is facing a lot of problems. Why don't we start with the easier subjects first?," she said.

As a novice politician, Lam said she had learned to be humble from the campaign.

She reiterated her commitment to housing, education, tax reforms, and youth works that she had promised in her election platforms. She will succeed Leung who proved unpopular with large swathes of Hong Kong residents as he tightly aligned to Beijing.

In 2016, Leung made the unexpected announcement that he would not run again, citing family reasons.

Lam's victory is a big relief for China's ruling Communist Party which had to handle the growing pro-democracy movement riding on adverse public feeling against China.

It is to be seen whether China grants Lam more room and powers to win public support.