Park has immunity from prosecution as long as she is in office even though her powers are suspended. 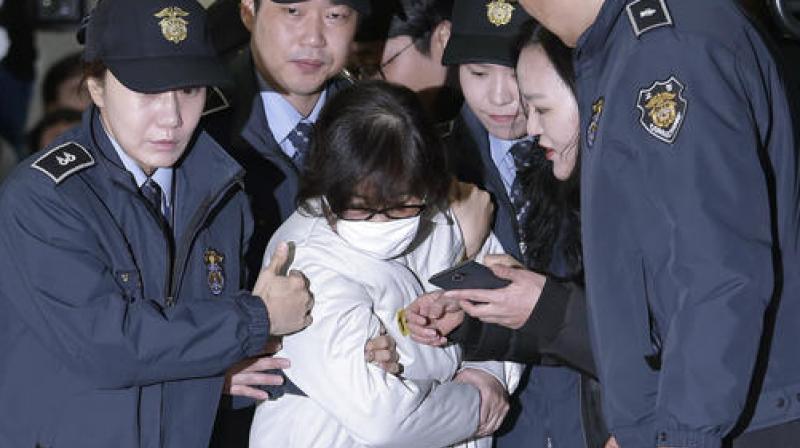 Choi Soon-sil, center, the jailed confidante of disgraced South Korean President Park Geun-hye, arrives for questioning into her suspected role in political scandal at the office of the independent counsel in Seoul. (Photo: AP)

Seoul: The detained friend of impeached South Korean President Park Geun-hye, at the centre of a corruption scandal engulfing Park's administration, said she was sorry on Monday when questioned by a special parliamentary committee, an opposition MP said.

Choi Soon-sil, whom Park has said she turned to at difficult times, denied key allegations against her, including colluding with Park to pressure big businesses into paying money to foundations she controlled, the MP said.

"I am sorry to the people of the country," Choi was quoted as saying by opposition Democratic Party MP Sohn Hye-won, who visited Choi at the Seoul Detention Centre and later told a committee hearing what she had said.

Choi and former government officials are on trial for abuse of power and fraud and are also under investigation on other charges by a special prosecutor who is probing Park's role in the scandal.

The visit came after Choi ignored several summons to appear at parliament hearings.

Prosecutors who indicted Choi in November said Park had colluded with her and her former aides to pressure big conglomerates to contribute 77 billion won ($64 million) to foundations set up to back her policy initiatives.

Park has denied wrongdoing but apologised for carelessness in her ties with Choi.

Park's December 9 impeachment is being reviewed by the Constitutional Court which has up to 180 days to reach a decision.

Park has immunity from prosecution as long as she is in office even though her powers are suspended.