Jesus was born rejected by some and regarded by many others with indifference, says Pope. 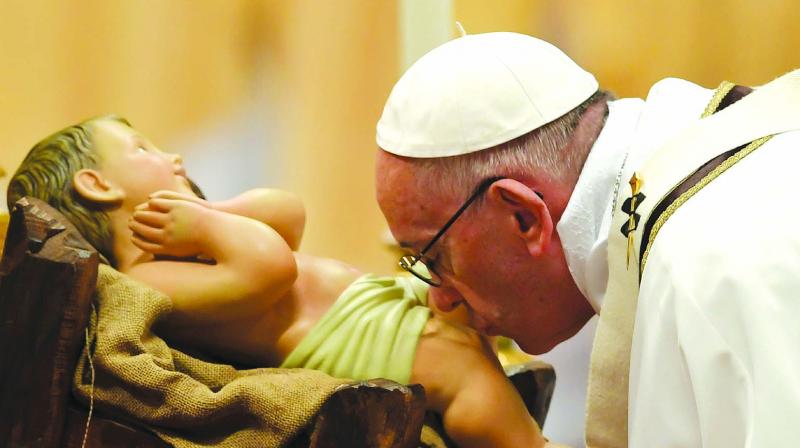 Pope Francis kisses a figurine of baby Jesus as he celebrates a mass on Christmas Eve, marking the birth of Jesus Christ, in the Vatican. (Photo: AFP)

Vatican City: Pope Francis said on Saturday that Christmas had been “taken hostage” by dazzling materialism that puts God in the shadows and blinds many to the needs of the hungry, the migrants and the war weary.

Pope Francis, leading the world’s 1.2 billion Roman Catholics into Christmas for the fourth time since his election in 2013, said in his Christmas Eve homily that a world often obsessed with gifts, feasting and self-centeredness needed more humility.

“If we want to celebrate Christmas authentically, we need to contemplate this sign: the fragile simplicity of a small newborn, the meekness of where he lies, the tender affection of the swaddling clothes. God is there,” the Pope said at St. Peter’s Basilica.

At the solemn but joyous service, attended by some 10,000 people as well as dozens of cardinals and bishops, Pope Francis said the many in the wealthy world had to be reminded that the message of Christmas was humility, simplicity and mystery.

“Jesus was born rejected by some and regarded by many others with indifference,” he said.

“Today also the same indifference can exist, when Christmas becomes a feast where the protagonists are ourselves, rather than Jesus; when the lights of commerce cast the light of God into the shadows; when we are concerned for gifts, but cold toward those who are marginalized.”

He then added in unscripted remarks: “This worldliness has taken Christmas hostage. It needs to be freed.”

Francis, who has made defence of the poor a trademark of his papacy, said the infant Jesus should remind everyone of those suffering today, particularly children.

“Let us allow ourselves to be challenged by the children who are not allowed to be born, by those who cry because no one satiates their hunger, by those who do have not toys in their hands, but rather weapons.”