Chinese Defence Ministry on being asked about US bombers at a news briefing said, the Chinese armed forces had the situation under control. 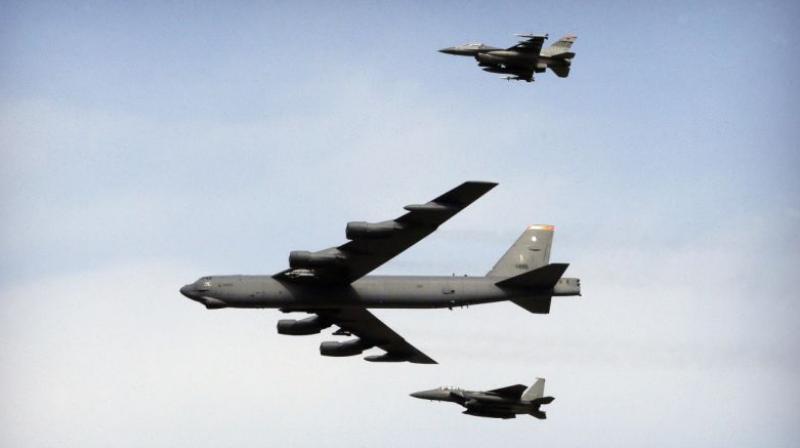 The US Air Force said the B-52s took off from Andersen Air Force Base on the US Pacific island of Guam and 'transited to the vicinity of the South China Sea' on Tuesday. (Photo: AP)

Tokyo: US Air Force B-52 bombers have carried out training in the "vicinity" of the South China Sea and the southern Japanese island of Okinawa, the Air Force said on Friday, in what a Chinese newspaper linked to China's drills near Taiwan.

The US Air Force said the B-52s took off from Andersen Air Force Base on the US Pacific island of Guam and "transited to the vicinity of the South China Sea" on Tuesday.

"The B-52Hs conducted training and then transited to the vicinity of Okinawa to conduct training with USAF F-15C Strike Eagles, before returning to Guam," it added.

"Continuous Bomber Presence (CBP) missions are intended to maintain the readiness of US forces. The US Pacific Command's CBP missions, which have been routinely employed since March 2004, are in accordance with international law."

The exercise was reported in Taiwanese media this week, which speculated it could have been a warning from the United States to China following China's stepped up military presence around Taiwan, the self-ruled island Beijing claims as its own.

Chinese Defence Ministry spokesman Wu Qian was asked about the US bombers at a news briefing on Thursday but would only say the Chinese armed forces had the situation under control.

China has been issuing increasingly strident warnings to Taiwan to toe the line, and has been flying military aircraft around the island in what China calls "encirclement patrols".

Beijing fears Taiwan President Tsai Ing-wen, from the pro-independence Democratic Progressive Party, wants to push for the island's formal independence. Tsai says she wants to maintain the status quo and peace with China.

In a Friday editorial, the widely-read Chinese state-run tabloid the Global Times said if the US bombers were meant to send a message to Beijing about Taiwan it would not work.

"The US cannot prevent the mainland exerting military pressure on Taiwan," it said.

"Mainland military aircraft will fly closer and closer to Taiwan and in the end fly above the island," the paper added.

"If the Taiwan authorities openly promote the 'Taiwan independence' policy and cut off all official contacts with the mainland, the mainland will deem Taiwan a hostile regime and has endless means to deal with it."

Taiwan and the South China Sea are two major faultlines between Washington and Beijing.

China has been angered by US "freedom of navigation" patrols in the disputed South China Sea, where China has reclaimed land for military bases, and by US support for democratic Taiwan.