The suspects did not have the correct documents, and faced up to five years in jail and a fine if convicted. 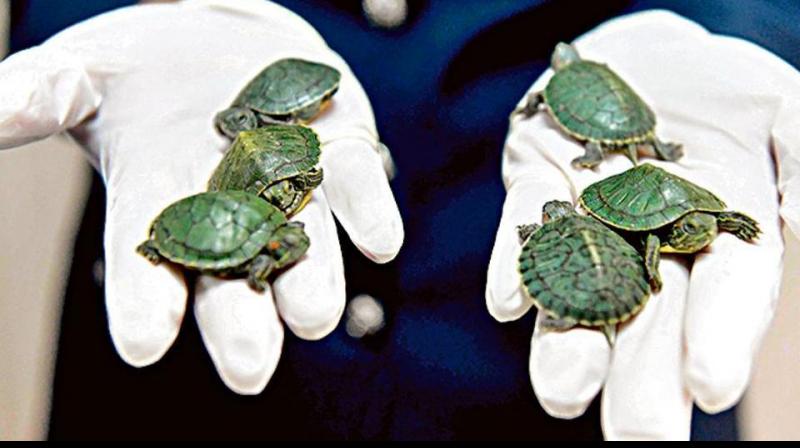 Red-eared terrapins – also known as red-eared sliders – are popular pets and can be found in many shops around the world. (Photo: AFP)

Kuala Lumpur: Malaysian customs officers arrested two Indian men attempting to smuggle over 5,000 terrapins through the country to be sold as pets, officials said on Wednesday.

The Southeast Asian country, home to rare animals such as orangutans and tigers, has become a hub for wildlife trafficking.

The men were detained at Kuala Lumpur's main airport last Thursday after they arrived from China with 5,255 red-eared terrapins.

Some died on the journey, although a large number survived.

"Our initial investigations found that (they) were brought in here for the purpose of being brought back to India," he told reporters.

Red-eared terrapins – also known as red-eared sliders – are popular pets and can be found in many shops around the world.

While they are not an endangered species and are commonly traded, permits are required to import them into Malaysia.

The suspects did not have the correct documents, and faced up to five years in jail and a fine if convicted.

Zulkurnain said the two men, whose identities were not disclosed, had been remanded in custody and that the terrapins would be handed over to relevant officials.

Kanitha Krishnasamy, regional director of the wildlife trade watchdog Traffic, called the case "bizarre" as trade in the terrapins is legal.

"What is clear is how crazy the pet trade has become," she said.

Customs officials have in the past seized animal parts at Kuala Lumpur airport, but it is unusual for them to find a huge stash of live creatures.