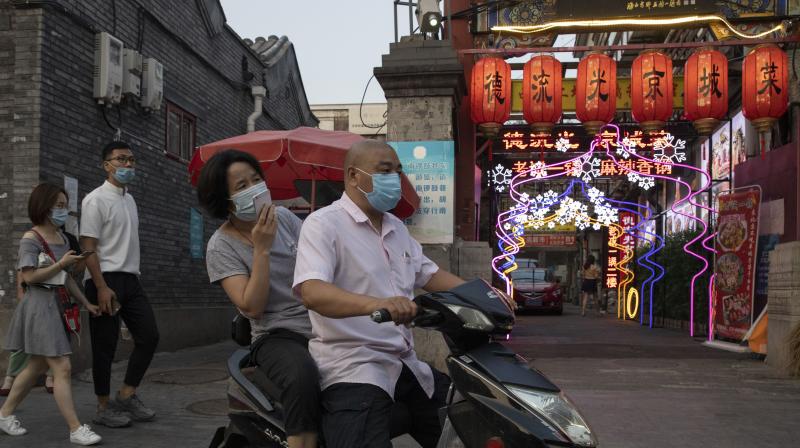 Residents wearing masks to curb the spread of the coronavirus past by lanterns and neon lights promoting a restaurant in Beijing. (AP)

Beijing: China has reported an uptick in new coronavirus cases, a day after the nation's CDC said it expects an outbreak in Beijing to be brought under control soon.

The National Health Commission said Saturday that 21 cases had been confirmed nationwide in the latest 24-hour period, including 17 in the nation's capital.

City officials have temporarily shut a huge wholesale food market where the virus spread widely, re-closed schools and locked down some neighbourhoods.

A report by the Center for Disease Control and Prevention said that testing has found only a few infected people without a link to the market and that the steps taken mean the risk of further spread is low, the official Xinhua News Agency said.

Anyone leaving Beijing is required to have a negative result from a nucleic acid test within the previous seven days. Many Chinese are travelling during a four-day holiday weekend that ends Sunday.

China has reported 83,483 confirmed cases and 4,634 deaths in the pandemic. People who test positive but show no symptoms are not included in its official case count.

South Korea has reported 51 newly confirmed cases of the coronavirus as fresh clusters continue to emerge in the densely populated Seoul area. They bring the national caseload to 12,653, including 282 deaths.

Thirty-five of the new cases came from Seoul and nearby cities and towns, which have been at the centre of a COVID-19 resurgence since late May.

Twelve others were linked to international arrivals. Health authorities are struggling to trace contacts and predict infection routes with new clusters popping up from just about everywhere.

Hundreds of infections have been linked to nightspots, church gatherings, restaurants and low-income workers such as door-to-door salespeople and warehouse employees. Officials have so far resisted calls to reimpose stronger social distancing guidelines after easing them in mid-April, citing concerns about a fragile economy.

Australian health officials are expecting more cases of COVID-19 as hundreds of nationals return from overseas to begin mandatory quarantine. About 300 people are due to arrive in Adelaide this weekend from Mumbai, India, while hundreds are expected to follow from South America and Indonesia.

People in hotel quarantine will be tested for the coronavirus at the start and end of their 14-day isolation. South Australia state Health Minister Stephen Wade says he's preparing for about 5% to 10% returnees to have the virus, as was the case when people returned from Indonesia in other states.

Melbourne recorded 30 new cases on Friday, continuing a run of double-digit increases that has more than tripled Victoria state's active cases to 183 in just over a week. In an attempt to reduce the chance of new flareups during a two-week school holiday break, almost 5,000 infrared thermometers are being shipped to popular vacation spots in the state.

The thermometers will be used at testing clinics set up on the Great Ocean Road tourist drive and in the Victorian Alps ski area. Australia has had 104 COVID-19 deaths and nearly 7,600 confirmed cases.