Muzaffarabad is the capital of Pakistan-administered Kashmir or Pakistan-occupied Kashmir. 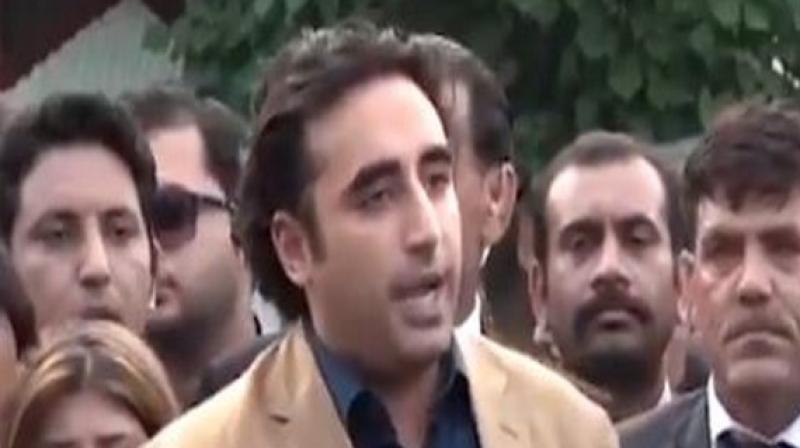 Islamabad: On the day when Pakistani Prime Minister Imran Khan threatened India of a nuclear war, Bilawal Bhutto- the leader of the country's National Assembly, criticised his government for its 'failed' policies on Pakistan-occupied Kashmir.

In a video posted on his Twitter handle on Monday, Bhutto, the chief of Pakistan Peoples' Party can be seen addressing a gathering, and saying, "Earlier our policy on Kashmir would be on how to grab Srinagar, now it is about how to save Muzaffarabad."

Muzaffarabad is the capital of Pakistan-administered Kashmir or Pakistan-occupied Kashmir.

In addition, Bhutto also criticised Khan government's ineffective policies for the current state of affairs. He claimed that the cricketer-turned-politician has been attacking Prime Minister Modi for copying Hitler's fascist role in Germany.

"But we ourselves have a fascist among us who is detaining the political leadership of the country without any evidence," Bhutto exclaimed, apparently referring to the detaining of former prime minister Nawaz Shari and former president Asif Ali Zardari.

Bhutto's remarks came on the day when Modi met US President Donald Trump on the sidelines of the G7 summit in the southwestern French city of Biarritz. The two leaders agreed that Kashmir is an internal matter of India and that New Delhi and Islamabad can resolve their issues bilaterally.

Shortly after Modi-Trump meeting, Khan in a televised address to Pakistan said that his country will go to any extent for Kashmir and asserted that Islamabad wouldn't be afraid of using its nuclear powers for Kashmir.

Pakistan has been rattled by the Indian government's move to strip the special status accorded to Jammu and Kashmir under Article 370 and has found itself completely isolated despite desperate attempts aimed at internationalising the issue.

Islamabad has been snubbed on all fronts as the international community has made it clear that the Kashmir issue is strictly New Delhi's internal matter.

The Pakistan government has downgraded bilateral ties with India in the wake of the decision and said it will consider all steps to counter what it described "illegal steps" taken by New Delhi.