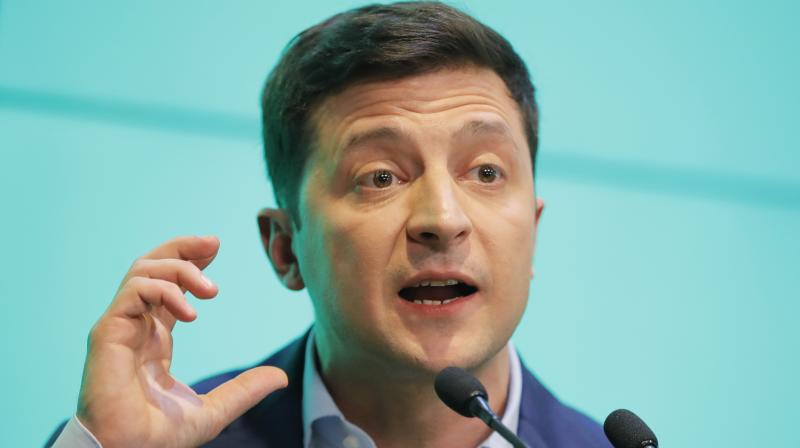 In his Facebook post, Zelensky warned Russia not to talk with Ukraine "in the language of threats or military or economic pressure." (Photo: File)

Kiev:  President-elect Volodymyr Zelensky dismissed an offer by Vladimir Putin to provide passports to Ukrainians, and pledged instead to grant citizenship to Russians who "suffer" under the Kremlin's rule.

The Russian president said Moscow was considering plans to make it easier for all Ukrainians to obtain Russian citizenship, after it earlier moved to grant passports in the country's separatist east. Kiev has been fighting Moscow-backed rebels in eastern Ukraine since 2014 in a war that has killed 13,000.

Zelensky, a comedian who won Ukraine's presidential election last week, responded to Putin's offer by releasing a statement on Facebook late on Saturday. "We know perfectly well what a Russian passport provides," he said, listing "the right to be arrested for a peaceful protest" and "the right not to have free and competitive elections."

He pledged instead to "give citizenship to representatives of all nations that suffer from authoritarian and corrupt regimes. "But first and foremost to the Russian people who suffer most of all". He said that one of the differences between Ukraine and Russia is that "we Ukrainians have freedom of speech, freedom of the media and the internet in our country."

A political novice, Zelensky has pledged to "reboot" peace talks with the separatists that also involve Russia and the West. Putin has not congratulated Zelensky on his election, but said he is ready to talk with a new Ukrainian leadership and wants to "understand" the actor's position on the conflict.

In his Facebook post, Zelensky warned Russia not to talk with Ukraine "in the language of threats or military or economic pressure." He previously called for more international sanctions against Moscow in response to Russia providing citizenship to residents of Ukraine's separatist east.

The EU also condemned Moscow's passport scheme, calling it a fresh assault on Ukraine's sovereignty and saying Russia sought to "destabilise" Ukraine after its presidential election.

Putin's decree last week allows people living in Ukraine's unrecognised Donetsk and Lugansk breakaway republics to receive a Russian passport within three months of applying for one. Zelensky is due to take office by early June.