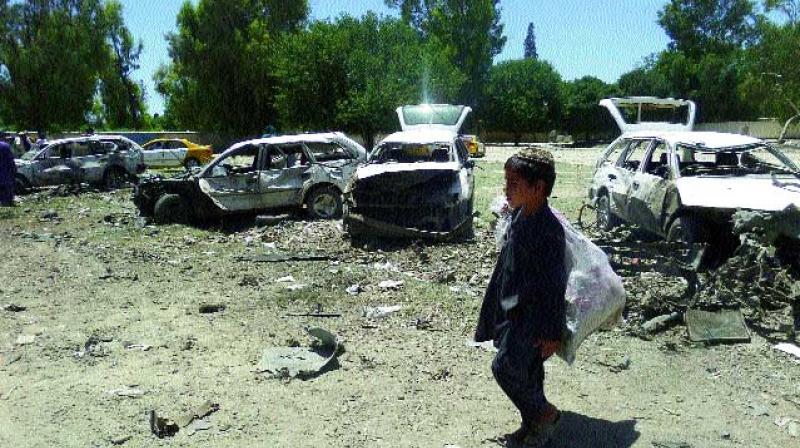 A boy walks past damaged vehicles at the site of a suicide attack in Khost, Afghanistan, on Saturday. (Photo: AP)

Khost: A Taliban car bomber killed 13 people in Afghanistan’s Khost city on Saturday, in the first major attack at the start of the holy month of Ramzan that targeted a CIA-funded militia group.

It is the latest in a series of assaults on Western-backed forces as the Taliban step up their annual spring offensive and the insurgency expands more than 15 years after they were ousted from power in a US-led invasion.

“A suicide car bomb in Khost province has killed 13 people,” said interior ministry spokesman Najib Danish. “The target was a public bus station which was hit by the bombing. The victims were in civilian clothes and it is difficult to verify their identities.”

But provincial police chief Faizullah Ghairat said members of the elite Khost Provincial Force (KPF) — known to be paid and equipped by the American CIA — were the target of the attack.

“The bombing took place early morning when KPF members were heading to work,” Ghairat told AFP. “But most of the victims are civilians.”

The KPF, estimated to have around 4,000 fighters, are believed to operate a shadow war against the Taliban in a province that borders Pakistan and are accused of torture and extrajudicial killings.

The brazen attack, claimed by the Taliban on their website, comes just a day after at least 15 Afghan soldiers were killed when insurgents attacked their base in Kandahar, in the third major assault this week on the military in the southern province.