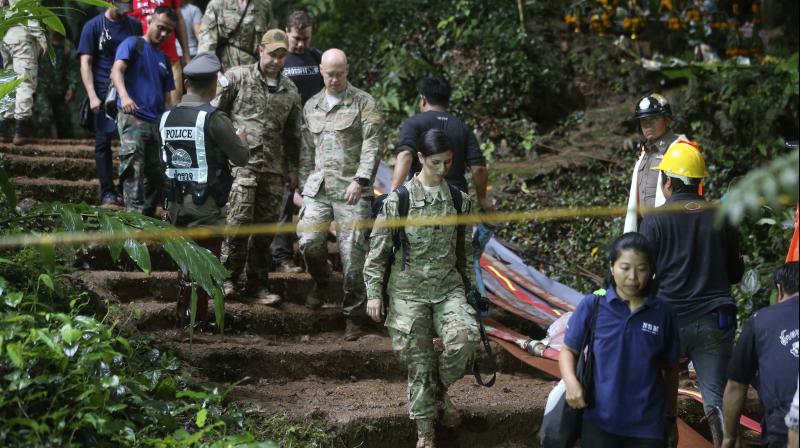 A team of American military personnel from the US Pacific Command, including pararescue and survival specialists, arrived at the site overnight to help rescue operations. (Photo: AP)

Mae Sai, Thailand: A team of US military personnel and British divers joined rescue efforts at a flooded cave in northern Thailand where 12 children and their football coach have been trapped for five days as heavy overnight rains hampered the search.

Flood waters seeped into a second chamber of the Tham Luang cave in Chiang Rai province forcing some of the rescue divers to turn back, according to officials.

The children, aged between 11 and 16, went into the cave Saturday and were trapped when heavy rains clogged the main entrance.

Around 1,000 Navy SEAL divers, police, soldiers, border guards and officials have been mobilised for the around-the-clock rescue in a remote border mountainous province near the Laos and Myanmar borders.

A team of American military personnel from the US Pacific Command, including pararescue and survival specialists, arrived at the site overnight to help rescue operations, according to an embassy spokeswoman.

"Essentially what they're looking at is assessing with the Thai authorities the potential courses of action and complementing the efforts underway," she added.

Three British cave diving experts arrived at the scene late Wednesday and entered the cave in full kit before emerging about an hour later.

"We've got a job to do," diver John Volanthen said as he went into the tunnel, declining to speak further.

Exhausted relatives have been camped out near the cave's entrance for days desperately awaiting news about the missing team and their 25-year-old coach.

"I'm sad. I want (my son) to be safe, we've heard nothing from officials yet," Thinnakorn, the father of a 12-year-old in the cave, told AFP.

Heavy rains overnight caused water levels to rise even as several high-pressure water pumps were installed inside the cave to drain the pools.

The flooding kept rescuers out of the tunnels as heavy rains fell overnight.

"The divers are now ready to go in as soon as the water drops to a suitable level," Thai Navy SEAL said on their Facebook page Thursday.

Border guards with police dogs scoured the site for new openings into the cave, which is several kilometres (miles) long.

Families brought clothing belonging to the kids to help the sniffer dogs find the team.

Search teams found three new holes this week, but only one of the chimneys was accessible.

The Tham Luang cave is a popular draw for local visitors during the dry season, though a sign at the entrance warns tourists not to enter during the wet season from July to November.

Official said the football team and their coach Ekkapol Janthawong have been in the cave before and know the site well.

Photos on Ekkapol's Facebook page showed him with some young footballers in the cave in 2016.

The harrowing search has captivated Thailand, where local media is blanketed with coverage of the boys.

The complex cave is infamous for being a tough site for skilled divers because of its complicated network of tunnels and pools.

VIDEO: Chanting monks pray alongside distraught relatives outside a flooded cave in northern Thailand where 12 children and their football coach have been trapped for days pic.twitter.com/J63Zj6lMvx