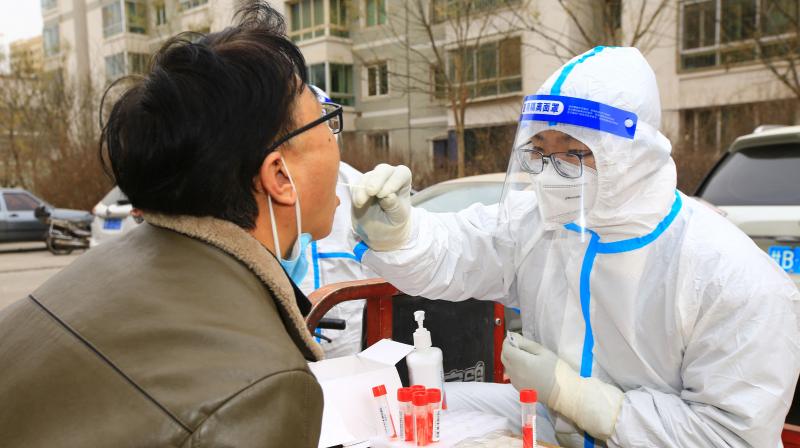 A health worker takes a swab sample from a resident to be tested for Covid-19 coronavirus in Jiayuguan, in China's northwestern Gansu province on November 24, 2022. (Photo by AFP) / China OUT

BEIJING: China posted another record high COVID-19 infections on Monday, after an extraordinary weekend of protests across the country over restrictive coronavirus curbs, in scenes unprecedented since President Xi Jinping assumed power a decade ago.

In Shanghai, demonstrators and police clashed on Sunday, with police taking away a busload of protesters, with the BBC saying that police assaulted and detained one of its journalists covering the events before releasing him after several hours.

Stocks and oil slid sharply on Monday as the rare protests raised worries about the management of China's zero-COVID policy and its impact on the world's second-largest economy, while Chinese censors scrambled to remove related images and posts.

During the weekend, protesters in cities including Wuhan and Lanzhou overturned COVID testing facilities, while students gathered on campuses across China in actions that were sparked by anger over an apartment fire late last week in the far western city of Urumqi that killed 10 people.

The deadly fire fuelled speculation that COVID curbs in the city, parts of which had been under lockdown for 100 days, had hindered rescue and escape, which city officials denied. Crowds in Urumqi took to the street on Friday evening, chanting "End the lockdown!", according to unverified videos on social media.

In Beijing, large crowds were gathered past midnight on Sunday along the capital's 3rd Ring Road during peaceful but often impassioned scenes.

In the early hours of Monday, one group chanted “we don’t want COVID tests, we want freedom” while brandishing blank white pieces of paper, which have become a symbol of protest in China in recent days.

Cars that passed by regularly joined in the fanfare by honking their horns and giving thumbs up to protesters which in turn generated massive cheers from those gathered.

The protesters were trailed by dozens of uniformed police officers, with plain-clothes security personnel in among the crowd and police cars moving along nearby.

An official who said he was the head of Beijing's police department came personally to speak to several of the protesters, holding a loudspeaker to plead with them to go home.

"You young people. You need to go home now. You’re affecting traffic here by standing on the road," he said.

Shanghai's clashes on Sunday followed a vigil the day before held by some of the city's residents for the victims of the Urumqi apartment fire, which turned into a protest against COVID curbs, with the crowd chanting calls for lockdowns to be lifted.

"Down with the Chinese Communist Party, down with Xi Jinping", one large group chanted in the early hours of Sunday, according to witnesses and videos posted on social media, in a rare public protest against the country's leadership.

China has stuck with Xi's zero-COVID policy even as much of the world has lifted most restrictions.

China earlier this month sought to make the curbs more targeted and less onerous, prompting speculation that it will soon begin moving towards full reopening, but a resurgence in cases has thwarted investor hopes for significant easing anytime soon.

Many analysts say China is unlikely to begin significant reopening before March or April at the earliest, and experts warn that China needs to ramp up its vaccination efforts as well.

China on Monday reported a fifth straight daily record of new local cases of 40,052, up from 39,506 a day earlier. Mega-cities Guangzhou and Chongqing, with thousands of cases, are struggling to contain outbreaks while hundreds of infections were recorded in several cities across the country on Sunday.