The five were believed to be members of a faction of the Jamaat-ul-Mujahideen Bangladesh (JMB) group. 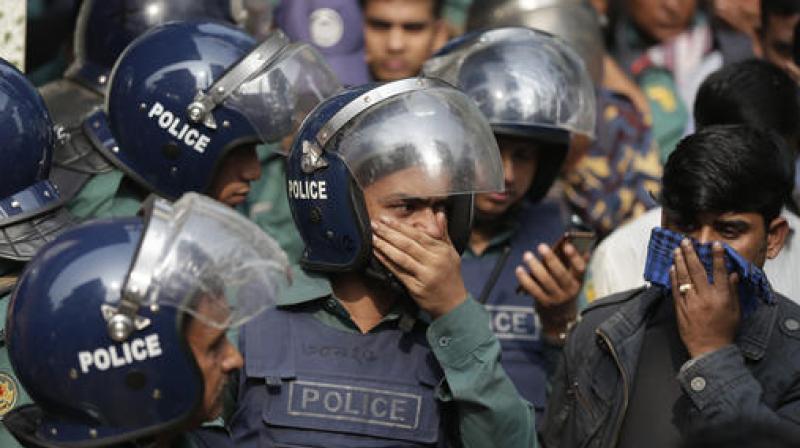 Bangladesh policemen cover their nose to protect themselves from the smell of teargas during a raid in a building in Dhaka, Bangladesh. (Photo: AP)

The five were believed to be members of a faction of the Jamaat-ul-Mujahideen Bangladesh (JMB) group, which was blamed for an attack on a cafe in Dhaka in July in which 22 people were killed, most of them foreigners. "They planned to attack on New Year's Eve," Monirul Islam, head of the counter-terrorism police unit, told a news conference.

Islam declined to elaborate when asked about the militants' target and how they planned to attack but said police had also seized 60 kg (132 lb) of explosives, when the five were detained in overnight raids in the capital. The five were paraded before the media but did not speak to reporters.

Authorities have already banned all outdoor gatherings in Dhaka from dusk on December 31 to dawn on January 1 on security grounds.

Militant attacks have increased in mostly Muslim Bangladesh, a country of 160 million people, over the past few years with several prominent liberal writers and members of religious minorities killed. The JMB has pledged allegiance to Islamic State, which police believe was involved in organizing the attack on the cafe in Dhaka's diplomatic quarter on July 1.

Islamic State claimed responsibility for what was the worst militant attack in Bangladesh.

Police have killed more than 40 suspected militants in raids since the cafe attack, including the man police said was the mastermind, Bangladesh-born Canadian citizen Tamim Ahmed Chowdhury.