India had on Tuesday objected to the seizure of shoes of Kulbhushan Jadhav’s wife ahead of the Sunday meeting. 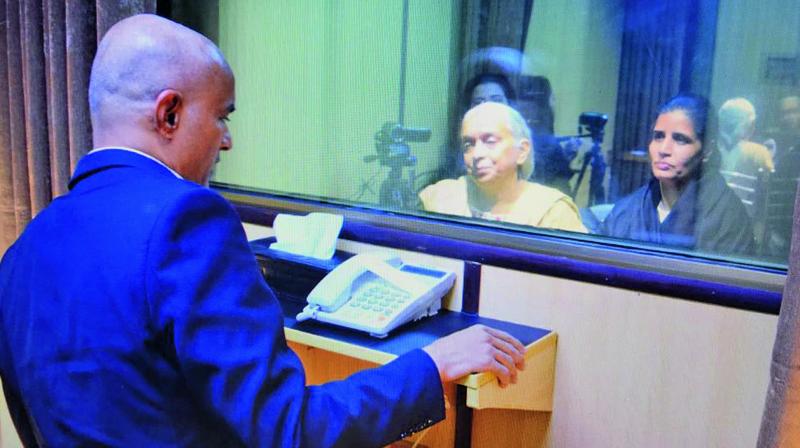 Kulbhushan Jadhav meets his wife and mother at the foreign ministry in Islamabad. (Photo: AP/File)

Islamabad/New Delhi: The spy drama being played out between India and Pakistan got murkier and bizarre on Wednesday with Pakistan saying that it had sent the “shoes” of Kulbhushan Jadhav’s wife for forensic examination after claiming to have discovered “something” in them.

Pakistan said that the shoes had a metal object which could possibly be a subscriber identity module (SIM), a small camera or a chip meant to record the conversation between the family.

The move comes a day after India termed the meeting between Mr Jadhav and his mother Avanti and wife Chetankul at the Pakistan foreign ministry in Islamabad as an “exercise that lacked credibility”, and charged that the two women had been harassed.

India had on Tuesday objected to the seizure of shoes of Kulbhushan Jadhav’s wife ahead of the Sunday meeting.

Islamabad responded by saying that there was a “metallic substance” in the shoes and that they were confiscated due to security reasons. It further said that Mr Jadhav’s wife had been given replacement shoes.

“The Indian baseless allegations and twists, that come 24 hours later, about the visit of the wife and mother of Commander Jadhav, a convicted terrorist and spy who has confessed to his crimes, are categorically rejected. There was something in the shoe. It is being investigated. We gave her a pair of replacement shoes. All her jewellery etc. were returned after the meeting,” Mr Faisal said in a statement.

“We do not wish to indulge in a meaningless battle of words. Our openness and transparency belies these allegations. If Indian concerns were serious, the guests or the Indian DHC (deputy high commissioner J.P. Singh) should have raised them during the visit, with the media, which was readily available, but at a safe distance, as requested by India,” he added.

“The fact is that Commander Jadhav’s mother publicly thanked Pakistan for the humanitarian gesture and this was recorded by the media,” Mr Faisal said.

Prior to the meeting conducted amid tight security, Mr Jadhav’s wife and mother were asked to wash their faces to remove all makeup, remove their jewellery and change their clothes.

India accused Pakistan of disregarding cultural and religious sensibilities of family members under the pretext of security. “Pakistan went so far as to have the mangal sutra, bangles and bindi of Jadhav’s mother and wife removed before they could meet him at the office of ministry of foreign affairs in Islamabad,” it said.

Upon returning from Pakistan, Mr Jadhav’s wife and mother met India’s external affairs minister Sushma Swaraj and other officials. During the December 25 meeting, whose pictures were released by Pakistan, Mr Jadhav was seen sitting behind a glass screen while his mother and wife sat on the other side. They spoke through intercom and the entire 40-minute proceedings appeared to have been recorded on video.

On April 10, 2017, Pakistan had sentenced Jadhav to death for carrying out espionage and sabotage activities in Balochistan and Karachi.

Pakistan claimed that Mr Jadhav’s real name is Hussein Mubarak Patel and that he was arrested on March 3, 2016, in a “counter-intelligence operation” from Mashkel area of Balochistan for his involvement in espionage and sabotage activities in Pakistan.

India dismissed the charges as concocted, and maintains that Mr Jadhav was kidnapped in Iran where he had legitimate business interests, and then brought to Pakistan. India moved the International Court of Justice, which ordered Pakistan to stay his execution.