It took 4 staff to haul endangered creature back to sea, just the latest in a string of turtle rescues along the country's devastated coast 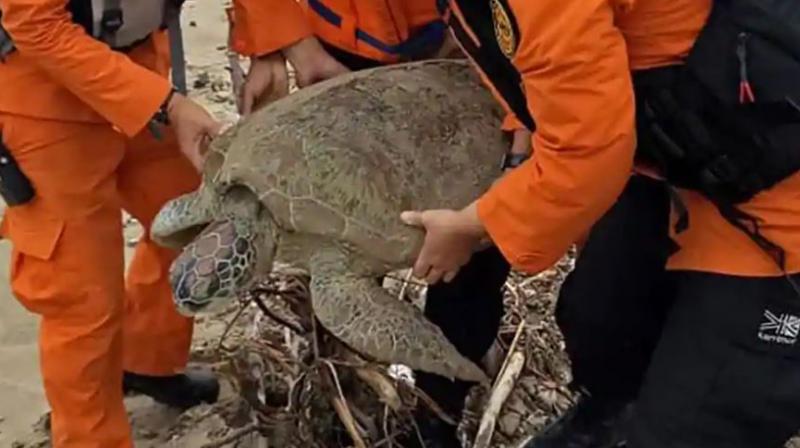 Indonesia's National Search And Rescue Agency shows rescuers carrying out one of eighteen stranded sea turtles on the beach in Kalianda, after the turtles were found washed ashore after a tsunami - caused by activity at a volcano known as the 'child' of Krakatoa .(Photo: AFP)

Kalianda: Searching a debris-strewn beach for victims of Indonesia's deadly tsunami, a rescue team happened upon a giant sea turtle trapped in a pile of marine trash.

It took four staff members to haul the endangered creature back to sea, just the latest in a string of turtle rescues along the country's devastated coast.

"The turtle was really large and it got stuck in a pile of rubbish, lying almost upside down," Adi Ayangsyah, a member of a search and rescue team in hard-hit Lampung on Sumatra island, told AFP Friday.

He said the turtle was "probably about 30 kilograms (66 pounds)".

This week, about 15 other turtles were rescued in the same area.

"We think they were swept ashore by the tsunami," said Teguh Ismail, head of Lampung's conservation agency.

"But they didn't have any wounds so we got them back in the water."

An eruption of the Anak Krakatoa volcano, which sits in the middle of the Sunda Strait between Java and Sumatra islands, caused a section of the crater to collapse and slide into the ocean, triggering the killer tsunami on Saturday evening.

On Friday, the death toll stood at 430 with some 159 still missing.

Hopes for finding any survivors are all but gone, but the hunt isn't limited to human victims.

"We'll keep our eye out for other stranded turtles as well," Ayangsyah said.

"For us, all lives matter. Human or animal -- we'll try to rescue them all.