Hun Sen said USD 40 million had been spent this year on top of a total amount of USD 290 million in previous arms deals with China. 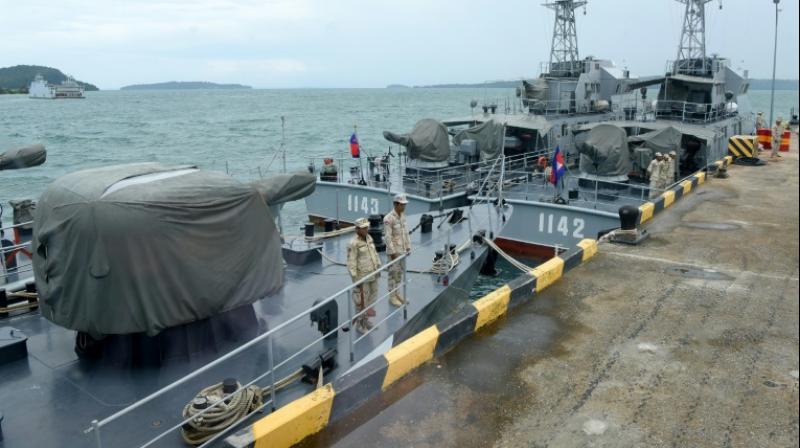 China has lavished billions of dollars in soft loans, infrastructure and investment on the poor Southeast Asian kingdom, which has tilted away from the US amid Hun Sen's increasingly authoritarian rule. (Photo: AFP)

Phnom Penh: Cambodia has purchased "tens of thousands" of weapons from China, premier Hun Sen said on Monday, providing rare details of arms deals with Beijing just days after denying a secret agreement to allow Chinese warships to use a local naval base.

The Wall Street Journal last week reported on a draft deal letting China access Ream base near Sihanoukville to dock warships and store weapons, apparently confirming months of rumours. Cambodia tried to knock down the report on Friday by taking dozens of reporters on an unprecedented tour of the base.

Prime Minister Hun Sen repeated the denials in his latest remarks and called the news "slander", but he went into an unusual level of detail about arms sales from its powerful neighbour. "I ordered the purchase of tens of thousands of additional weapons," he said, without explaining what the country had bought. "Now they are being shipped."

Hun Sen said USD 40 million had been spent this year on top of a total amount of USD 290 million in previous arms deals with China. He was speaking during a trip to the construction site of a Chinese-funded stadium that he called a gift from President Xi Jinping.

China has lavished billions of dollars in soft loans, infrastructure and investment on the poor Southeast Asian kingdom, which has tilted away from the US amid Hun Sen's increasingly authoritarian rule.

Cambodia has also stepped up military exercises with China and been a staunch diplomatic ally in the fiercely contested South China Sea. The Ream base under scrutiny is strategically located in the Gulf of Thailand and gives ready access to the disputed waterway.

The US embassy in Phnom Penh has questioned the possible hosting of foreign military assets there. The base is also close to Sihanoukville, where many casinos and properties are Chinese-owned.

Anger built in the southwestern city last month when a Chinese building under construction collapsed, killing 28 people. Analysts say Hun Sen, who has been in power for 34 years, is attuned to the potential for an anti-China backlash and placing a base there would be a step too far for Cambodians.

Friday's tour of the base was unprecedented in a country where military installations are almost never opened to the media. During the closely chaperoned trip, navy and government officers showed reporters a number of outhouses and a jetty where several Cambodian-flagged patrol ships had docked.