Authorities in Beijing, Hong Kong have repeatedly said legislation is aimed at a few “troublemakers” and will not affect rights and freedoms 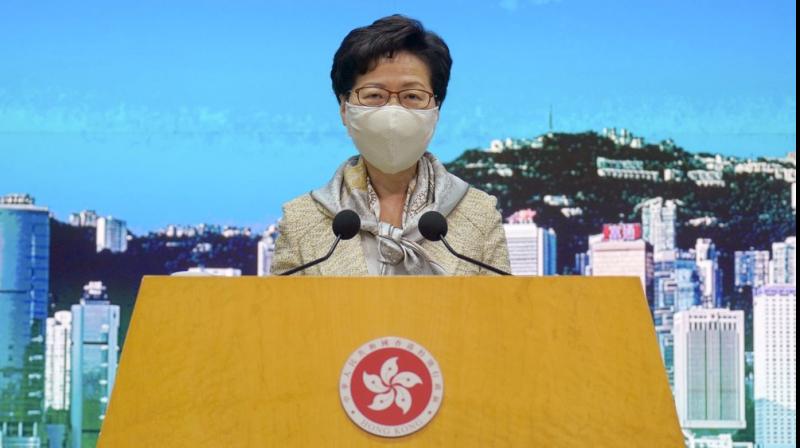 Hong Kong Chief Executive Carrie Lam listens to reporters' questions during a press conference in Hong Kong, Tuesday, June 30, 2020. Hong Kong media are reporting that China has approved a contentious law that would allow authorities to crack down on subversive and secessionist activity in Hong Kong, sparking fears that it would be used to curb opposition voices in the semi-autonomous territory. (AP Photo)

HONG KONG: China’s parliament passed national security legislation for Hong Kong on Tuesday, setting the stage for the most radical changes to the former British colony’s way of life since it returned to Chinese rule 23 years ago.

State media is expected to publish details of the law - which comes in response to last year’s often-violent pro-democracy protests in the city and aims to tackle subversion, terrorism, separatism and collusion with foreign forces - later on Tuesday.

Amid fears the legislation will crush the global financial hub’s rights and freedoms, and reports that the heaviest penalty under it would be life imprisonment, prominent pro-democracy activist Joshua Wong said he would quit his Demosisto group.

“It marks the end of Hong Kong that the world knew before,” Wong said on Twitter.

The legislation pushes Beijing further along a collision course with the United States, Britain and other Western governments, which have said it erodes the high degree of autonomy the city was granted at its July 1, 1997, handover.

Hong Kong leader Carrie Lam, speaking at her regular weekly news conference, said it was not appropriate for her to comment on the legislation as the meeting in Beijing was still going on, but she threw a jibe at the United States.

“No sort of sanctioning action will ever scare us,” Lam said.

Lau Siu-kai, vice-president of a think-tank under the Beijing cabinet’s Hong Kong and Macau Affairs Office, told Reuters the law was passed unanimously with 162 votes. It is expected to come into force imminently.

The editor-in-chief of the Global Times, a tabloid published by the People’s Daily, the official newspaper of China’s ruling Communist Party, said on Twitter the heaviest penalty under the law was life imprisonment, without providing details.

Authorities in Beijing and Hong Kong have repeatedly said the legislation is aimed at a few “troublemakers” and will not affect rights and freedoms, nor investor interests.

The legislation may get an early test with activists and pro-democracy politicians saying they would defy a police ban, amid coronavirus restrictions, on a rally on the anniversary of the July 1 handover.

At last year’s demonstration, which came amid a series of pro-democracy protests, a crowd stormed and vandalised the city’s legislature.

“We will never accept the passing of the law, even though it is so overpowering,” said Democratic Party chairman Wu Chi-wai.

It is not clear if attending the unauthorised rally would constitute a national security crime if the law came into force by then.

A majority in Hong Kong opposes the legislation, a poll conducted for Reuters this month showed, but support for the protest movement has slipped, now getting the backing of a slim majority.

This month, China’s official Xinhua news agency unveiled some of the law’s provisions, including that it would supersede existing Hong Kong legislation and that interpretation powers belong to China’s parliament top committee.
Slideshow (4 Images)

Beijing is expected to set up a national security office in Hong Kong for the first time and could also exercise jurisdiction on certain cases.

Judges for security cases are expected to be appointed by the city’s chief executive. Senior judges now allocate rosters up through Hong Kong’s independent judicial system.

It is not known which specific activities are to be made illegal, how precisely they are defined or what punishment they carry.

Hong Kong is one of many developing conflicts between China and the United States, on top of trade, the South China Sea and the coronavirus pandemic.

Britain has said the security law would violate China’s international obligations and its handover agreement.

A Japanese official said that if the law had been passed, it was “regrettable”.

Democratically ruled and Chinese-claimed Taiwan said it “strongly condemns” the legislation and its president, Tsai Ing-wen, said she was very disappointed.

The European Union has said it could take China to the International Court of Justice in The Hague over it.

China has hit back at the outcry, denouncing “interference” in its internal affairs.