Technical details of Friday's launch suggested it was significantly more powerful than the first ICBM test on July 4. 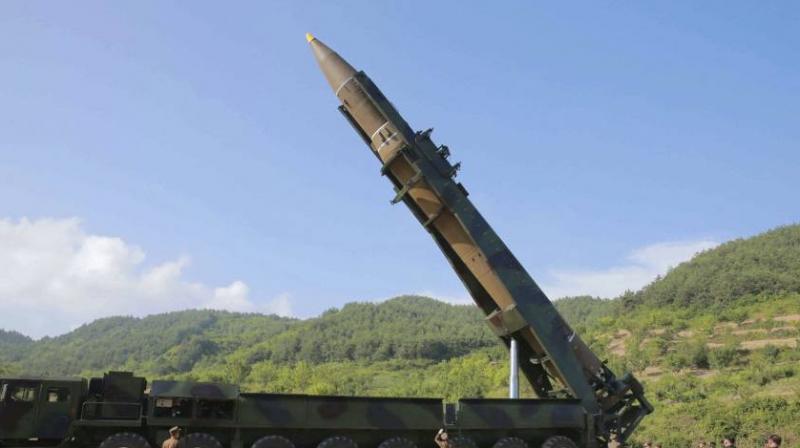 The North's first ICBM test set off global alarm over the nation's weapons capabilities and a push by the US to impose more UN and bilateral sanctions, with the US Senate passing new bipartisan sanctions on Pyongyang on Friday. (Photo: Representational/AP)

Seoul: North Korea on Sunday said its latest ICBM test was a "warning" targeting the US for its efforts to slap new sanctions on Pyongyang and threatened a counter- strike if provoked militarily by Washington.

The North conducted its second intercontinental ballistic missile test late Friday, with leader Kim Jong-Un boasting of his country's ability to strike "all the US mainland".

Technical details of Friday's launch suggested it was significantly more powerful than the first ICBM test on July 4, with a theoretical range long enough to reach the US east coast, according to experts.

The North's first ICBM test set off global alarm over the nation's weapons capabilities and a push by the US to impose more UN and bilateral sanctions, with the US Senate passing new bipartisan sanctions on Pyongyang on Friday.

But the US-led campaign only provided "further justification" for the North's resolve to maintain its weapons programmes, Pyongyang's foreign ministry said in a statement carried by the state-run KCNA.

"The... test-fire of ICBM ... this time is meant to send a stern warning to the U.S. making senseless remarks, being lost to reason in the frantic sanctions and pressure campaign against the DPRK," it said, using an acronym for the North's official name.

The statement came hours after US President Donald Trump warned that he would not allow China -- the impoverished North's sole major ally and economic lifeline -- to "do nothing" about North Korea.

Trump, who is at loggerheads with Beijing over how to handle Kim's regime, has repeatedly urged China to rein in its neighbour, but China insists dialogue is the only practical way forward.

The US also today had two powerful strategic bombers fly over the Korean peninsula for a joint drill with Japanese and South Korean forces, in a pointed show of force against the North.

But Pyongyang's foreign ministry urged the US to "wake up from the foolish dream of doing any harm to the DPRK."

"If the Yankees... dares brandish the nuclear stick on this land again ...the DPRK will clearly teach them manners with the nuclear strategic force," it said.

There remains a doubt, whether the North can miniaturise a nuclear weapon to fit a missile nose cone, or if it has mastered the technology needed for the projectile to survive re-entry into the atmosphere.

But since Kim came to power in 2011, there has been a series of technical advances, including three nuclear tests and a string of missile launches.

In all, six sets of UN sanctions have been imposed on North Korea since it first tested an atomic device in 2006, but two resolutions adopted last year significantly toughened the sanctions regime.