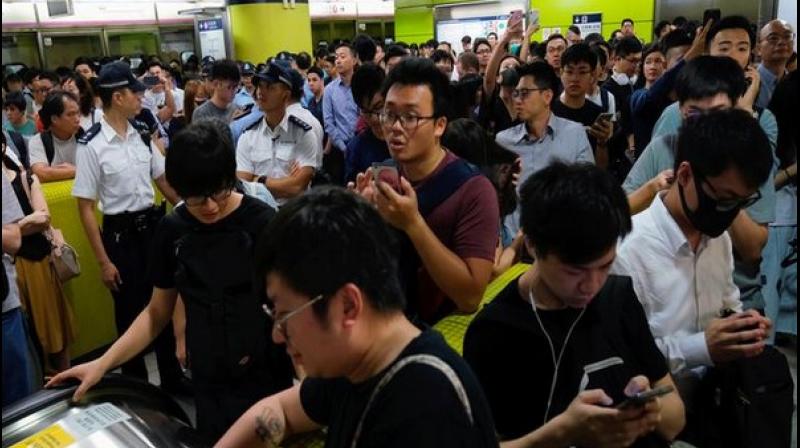 Commuters were forced to look for other alternate modes of transport which led to traffic snarls in several parts of Hong Kong. (Photo: ANI)

Hong Kong: Thousands of commuters had a harrowing time on Tuesday after protesters blocked metro train services during the morning rush hour, in the latest anti-government demonstrations which have rocked Hong Kong for the last few months.

The demonstrators, some clad in black and wearing masks, stopped a Whampoa-bound train from Tiu Keng Leng station in Kowloon at 7:50 am (local time) by standing in groups and obstructing the doors. The train finally left at 9 am (local time), South China Morning Post reported.

At Admiralty station, as many as 25 protesters blocked train doors from closing at around 9:30 am (local time).

The MTR (Mass Transit Rail), the city's metro system, had announced the delay in services due to the protest and urged the commuters to allow more time for their trip.

The delay in services sparked confrontations between the commuters and protesters, forcing the officials to intervene.

Commuters were forced to look for other alternate modes of transport which led to traffic snarls in several parts of Hong Kong.

Long queues of buses and vehicles were moving at a snail's pace along the eastern corridor and along Connaught Road from Central to Causeway Bay.

However by 11:30 am, MTR operations were gradually returning to normal after services on some sections were suspended and trains running at slower speeds.

Hong Kong has seen eight consecutive weeks of anti-government protests that began against a now-suspended extradition bill, but have since broadened to include calls for democracy and police accountability.

The said extradition bill was proposed on April 3 and its opposers argue that its controversial amendments will leave anyone on Hong Kong soil vulnerable to being grabbed by the Chinese authorities for political reasons or inadvertent business offences.

Multiple protests sometimes violent continue to take place in the semi-autonomous state despite the city's pro-Beijing leader Carrie Lam publicly apologising for proposing the controversial legislation and announcing later that the bill was "dead".