Hong Kong's Twitter warriors were quick to pounce, many of them mocking the city's police force for helping to make the phrase go viral 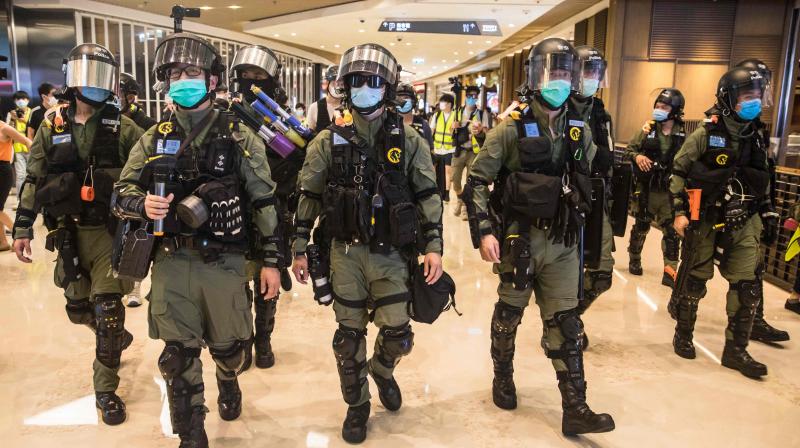 Riot police secure a shopping mall after prostesters gathered to mark one year since a group of white-clad men attacked pro-democracy protesters who were returning home from protests at the nearby Yuen Long train station, in Hong Kong. (AFP)

Hong Kong: As China moves to intimidate and punish anyone who voices support for Hong Kong independence, an unlikely source has inadvertently ignited a Twitter trending hashtag advocating just that -- the city's police force.

To the amusement of pro-democracy supporters online, Hong Kong police used #HKIndependence in a tweet on Wednesday night announcing the arrest of four students for online posts deemed a threat to China's national security.

"They were suspected of secession by advocating #HKIndependence. Investigation is underway," the overnight tweet to the force's 84,000 followers read.

Hong Kong's Twitter warriors were quick to pounce, many of them mocking the city's police force for helping to make the phrase go viral.

They pointed to the irony of police warning on Wednesday that writing online comments about Hong Kong independence could constitute inciting secession.

"Oh HK police just created a new hashtag #HKIndependence, hope it doesn't trend," wrote one in a tweet, which soon racked up more than 5,000 likes and retweets each.

@HongKongHermit, a popular account run by a foreign Hong Kong resident who is frequently caustic towards the city's police, chipped in.

"You do realise that you just created a #HKIndependence hashtag and are causing it to trend?" he wrote.

"Congratulations, you just did more to "incite" and "promote secession" than some teens with some leaflets ever did. Let them go or arrest your social media manager."

It targets four types of crime: subversion, secession, terrorism and colluding with foreign forces -- with up to life in prison.