Love in a time of tear gas: Politics and romance on Hong Kong’s barricades

Like Abby and Nick - whose real names have been not been used - many are young, bookish and should be on fast-track to well-paying jobs. 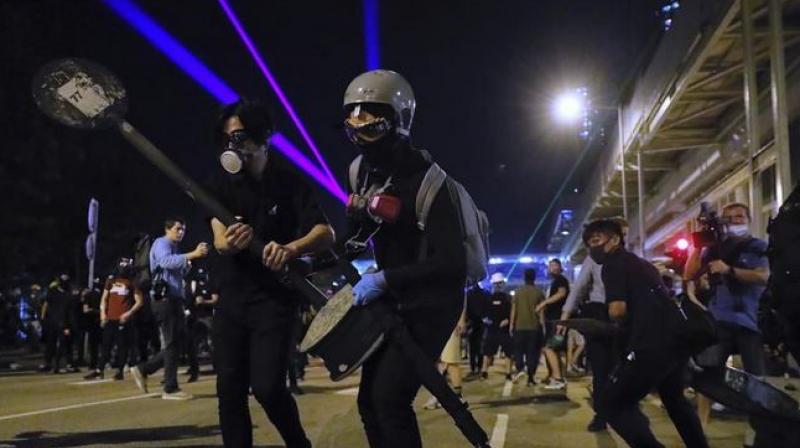 Nick, 20, met Abby, a year his junior, at university in June as debate on an extradition bill to China began to fizz. (Photo: AP)

Hong Kong: A gas mask lovingly adjusted, a hand squeezed before approaching police lines and a frantic search through swirls of tear gas -- Abby and Nick’s relationship has blossomed on the barricades during Hong Kong’s long summer of protest.

Most of the frontline protesters driving the months-long pro-democracy demonstrations are students -- so-called “braves” facing pepper spray, rubber bullets and arrest in defence of their city’s values.

Like Abby and Nick -- who are keeping their real names under wraps -- many are young, bookish and should be on the fast-track to well-paying jobs in the city’s financial services sector.

Instead a political awakening has thrust them onto the frontlines.

For endless weeks they have fended off tear gas and run from police baton charges, an unlikely band of rebels -- labelled “rioters” by Hong Kong police and “terrorists” by China -- who have forged tight bonds over a long holiday of demonstrations.

Nick, 20, met Abby, a year his junior, at university in June as debate on an extradition bill to China began to fizz.

The pair have since spent hours together on the barricades facing riot police -- dates of sorts, spiced up by adrenaline and fired by the injustice at the city government’s refusal to give ground.

“We’ve been to a lot of protests since June, nearly every weekend,” Abby says.

“It’s not about having fun. But it is very good to share the experience with someone... it’s unique.”

The couple travel to protests together, transforming from ordinary, inconspicuous students into black-clad rebels in shopping mall toilets, faces covered by gas masks and goggles as they take up positions a few rows back from the hardcore demonstrators who throw bricks at the police.

“If I live long enough to tell my son, my grandson, this will be a great story,” says Nick, a diminutive humanities student.

At a recent demo in the district of Tsuen Wan, Nick held an umbrella over Abby while she double checked the clasps on his gas mask -- tender moments before a hail of tear gas, which saw the couple separated during the chaos.

Enveloped in gas, Nick still pulled his goggles down, frantically trying to message his girlfriend.

“I was worried,” he told AFP later. “Normally I don’t go right to the front with her... we lost each other when the police fired the first tear gas. I found her an hour later at a nearby shopping mall.”

The couple’s motivation is long-standing, both seeking to make right the failure of the “Umbrella Movement” protests of 2014 which withered after two and a half months.

This time protests show little sign of abating, with the extradition bill sharpening their focus. The bill, which has been suspended but not formally withdrawn, is an emblem of Beijing’s creeping control over a city which enjoys unique freedoms.

“I’m one of the people who advocates democracy... if the bill is passed I may be extradited to China,” says Nick.

“This movement has caught the attention of the Chinese government.. it’s now or never for Hong Kong.”

Nick and Abby are far from alone as politics and romance aligns.

The weeks of rolling protests also brought Cindy and Charles, both 33, back together after a break-up.

Charles said he couldn’t forget the first day when tear gas was fired at a protest that Cindy had attended without him.

“I couldn’t contact her. I was very worried,” he said.

“I realised she’s really important to me, I knew then we have to get back together,” he added.

As Nick and Abby reflect on another weekend of violence in Hong Kong, they profess they are ready to risk everything as they fight for their city’s future.

“If I am killed and it helps Hong Kong, then I will be okay with it,” said Abby.

While both are confident they are doing the right thing, the abnormality of life after three months of protest is starting to catch up with them.