The controversial leader's embalmed body is kept in a glass display at the memorial hall. 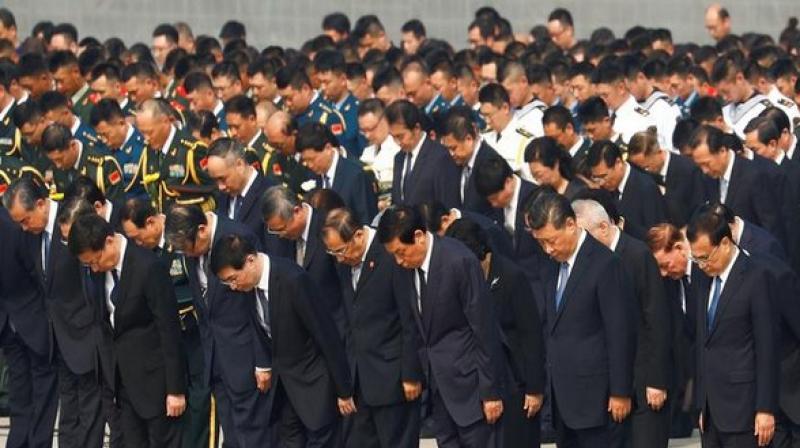 Xi and other top officials visited Maos' mausoleum which is located in Tiananmen Square in Beijing and bowed three times to the late leader's statues. (Photo: ANI)

Beijing: In a rare gesture, President Xi Jinping on Monday paid tribute to the founding father of People's Republic of China Mao Zedong ahead of the celebration to mark 70 years of communist rule in the country.

Xi and other top officials visited Maos' mausoleum which is located in Tiananmen Square in Beijing and bowed three times to the late leader's statues, reported Xinhua.

He also paid respects to the remains of Mao who died in 1976. The controversial leader's embalmed body is kept in a glass display at the memorial hall.

According to Al Jazeera, the last time a Chinese leader bowed to Zedong was six years ago when Xi commemorated 120 years since Mao's birth.

Mao had a controversial legacy, his announcement of the formation of the People's Republic of China in 1949 led to the outbreak of the civil war. As the communist party undertook reform in the country millions of landlord were executed, reported CNN.

The move to honor Mao comes at a time when China is reading itself for a massive parade of its most advanced weapons next week in a display of its indigenous military capabilities to commemorate its National Day, the Defence Ministry has said.

The People's Republic of China is celebrating 70 years of its founding on October 1 and the parade, the largest ever to be staged, will take place in the heart of Beijing, The Strait Times reported.