The man, who appeared to be in his 60's was found on a pavement 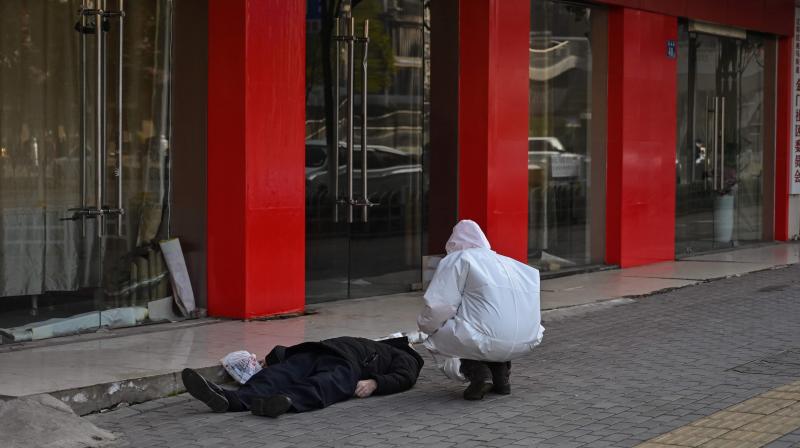 An official in a protective suit checks on an elderly man wearing a facemask who collapsed and died on a street near a hospital in Wuhan. AFP photo

A grey-haired man wearing a face mask lies dead on the pavement at ground zero of China's virus epidemic, a plastic shopping bag in one hand.

On what would typically be a crowded street in Wuhan, an industrial city of 11 million under quarantine, there are only a few passersby and they dare not go near him.

The man lay straight on his back in front of a closed furniture store. Medical staff in blue overalls gently shrouded his body with a blue blanket.

The ambulance left, and police stacked supermarket cardboard boxes to hide the scene.

AFP could not determine how the man, who appeared to be aged in his 60s, had died. AFP contacted police and local health officials afterwards but could not get details on his case.

But the reaction of the police and medical staff in hazmat suits, as well as some of the bystanders, highlighted the fear pervading the city.

A woman standing near the man, wearing pink pyjamas and a Mao cap, said she believed he had died from the virus.