Nepalese officials said Wednesday that they were considering changing rules about who was allowed up Everest. 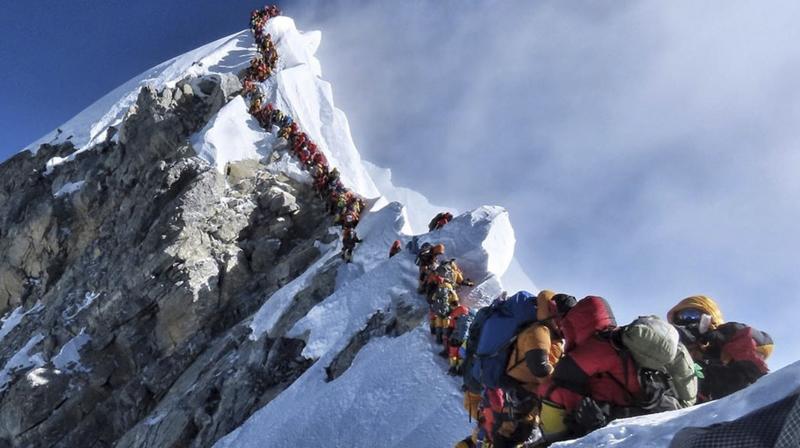 Nepal issued 381 permits this year, a record number; a smaller number of adventurers also climb from the Chinese side. (Photo:AP)

Nepal: The pictures were astounding: a single-file line of dozens, if not hundreds, of people, perched on a jagged ridge, tantalizingly close to the summit of Mount Everest.

The masses were a sign of dangerous overcrowding on the mountain, which sits along the Nepal-China border, creating perilous delays in unforgiving conditions. The trekkers, who wear oxygen tanks with a limited supply, face temperatures that drop far below 0 Celsius as they approach the peak, which reaches 29,029 feet above sea level.

Nepal issued 381 permits this year, a record number; a smaller number of adventurers also climb from the Chinese side. This climbing season — April and May — also had a paltry number of good weather days, leading many people to set out at once when the skies cleared and the winds seemed calm.

Nepalese officials said Wednesday that they were considering changing rules about who was allowed up Everest.

At least 11 people died this month climbing Everest, more than twice the number who died last year. Most were on the Nepalese side; only two of the deaths occurred on the Chinese side, which has more restrictions. Many had reached the summit and were on their way down.

The climbers who died came from India, the United States and Europe. One was a Nepali guide. All were described as experienced trekkers. Here is what we know about their deaths.

Ravi Thakur, from India, died on May 17 while in his tent on the mountain’s highest camp site. Thaneshwar Gurgai of Seven Summit Treks told AP (The Associated Press) that Thakur faced issues while descenting after successfully reaching the top. Thakur’s body was disovered by him.

Anjali Kulkarni, scaled the peak with her husband, Sharad. An expedition organiser told The Times of India that Anjali Kulkarni died from ‘energy loss’ on her way back to Camp. Ameet Singh, a close friend, told the paper that the couple had climbed many other mountains together, including Mount Kilimanjaro. “They had good fitness levels. And there was no bad weather, no contention on Sherpa’s availability. This is really sad.”

Solapurs’ Nihal Bagwan suffered acute dehydration and exhaustion on his way down from the summit on May 23, according to The Times of India. It was his second attempt to climb Mount Everest after falling short five years ago. Bhagwan had recently received a masters in physical education and planned to teach at a local institution, the paper reported.

“We had planned a hero’s welcome for him, but were left stunned,” his friend Anand Bansode told the paper.

Das, 50, of Odisha, India, scaled Everest twice, but did not survive her second expedition. The New Indian Express reported that she became ill and died on her way down the mountain, around the balcony area on May 23. Odisha TV reported she tried to climb the mountain in 2004 and 2006, but only succeeded in 2008. The clothes she wore during her 2008 trek have been put on display at Odisha’s State Museum.

“It is a matter of great pride for every Odia that she had scaled the Mount Everest,” said Jayanti Rath, the museum superintendent.