According to rescue sources, the death toll may further rise as several persons are still trapped in the wreckage. 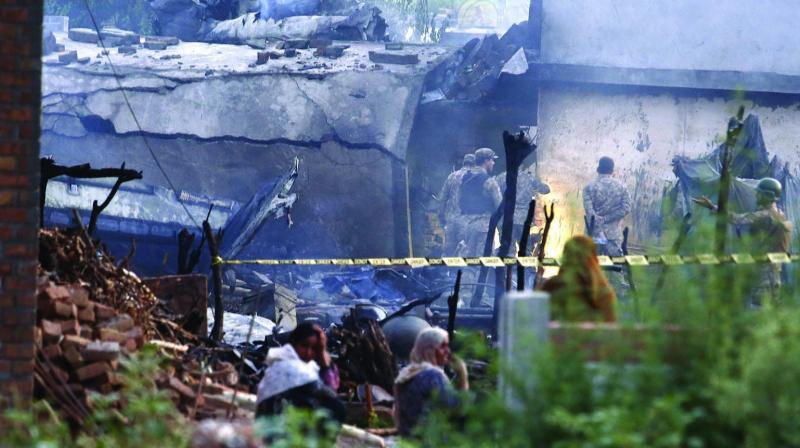 Pakistan Army officials examine the site of a plane crash in Rawalpindi on Tuesday. (Photo: AP)

Islamabad: At least 19 people, including five crew members, lost their lives after a Pakistan Army aviation aircraft on a routine training flight crashed into a residential area near Mora Kalu in Rawalpindi on Tuesday.

According to an Inter-Services Public Relations (ISPR) news release, 12 others were wounded in the incident. They were shifted to a nearby hospital.

Soon after the crash, a massive fire broke out that engulfed several houses. However, the cause of the accident or the type of aircraft involved is still unknown.

The ISPR said that “rescue teams of the Pakistan Army and Rescue 1122 had reached the site of the incident and the fire had been extinguished”.

“The plane hit the side of the building and the structure it has crashed into has completely collapsed,” an Army officer at the scene said.

The site, in a village on the edge of an affluent housing development called Bahia Town, was surrounded by military and rescue service vehicles.

According to rescue sources, the death toll may further rise as several persons are still trapped in the wreckage.

President Arif Alvi and Prime Minister Imran Khan expressed their grief over the loss of lives in the aircraft crash.

In 2016, a Pakistan International Airlines plane carrying 48 people crashed and burst into flames in a hilly area near Abbottabad after facing engine problems.