Nawaz Sharif flies to see ailing Kulsoom, ‘may not return’

Nawaz Sharif will celebrate Eidul Azha with his wife and sons on September 2, and will come back to Pakistan on September 5. 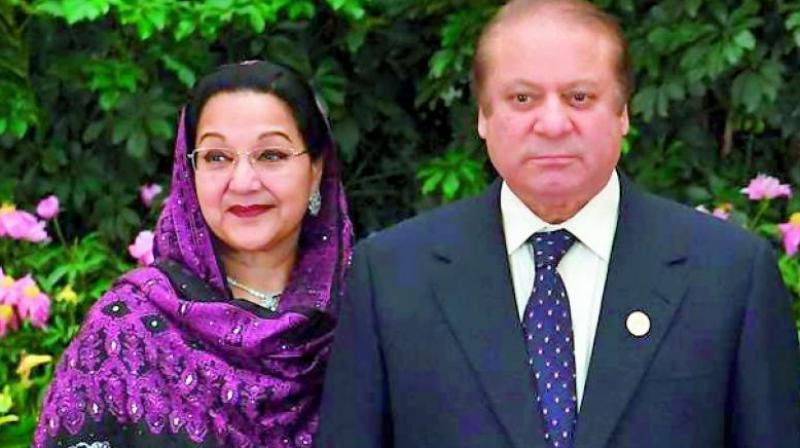 Islamabad: Former Pakistan Prime Minister Nawaz Sharif on Wednesday left for London to see his ailing wife Kulsoom Nawaz who has been diagnosed with throat cancer, amid speculation that he might not return due to the ongoing corruption and money laundering cases against him.

Nawaz Sharif reached Lahore’s old airport from  his residence Jati Umra amid strict security. All routes to the airport were sealed, and security agencies were on high alert. Cellular phones of the staff that was appointed on duty were taken as well.

Punjab chief minister Shehbaz Sharif and Pakistan Muslim League (Nawaz) leader Asif Kirmani also reached the airport along with others to see him off. Nawaz Sharif met Shehbaz at state lounge before departing.

Nawaz Sharif will celebrate Eidul Azha with his wife and sons on September 2, and will come back to Pakistan on September 5. The PML-N will also conduct a rally in west London during his visit.

According to Sharif’s close aide senator Pervaiz Rashid, the former Premier will stay in London for at least 10 days.

“However, he may extend his stay for more days depending on Begum Kulsoom’s health,” he said. Rashid, however, dismissed the rumours, saying Sharif loves his country.

Meanwhile, doctors were waiting for the results of some important skin and other tests of Kulsoom Nawaz, and her chemotherapy will begin within a few days.