Some passengers were cooking breakfast when the gas cylinder exploded, the report said. 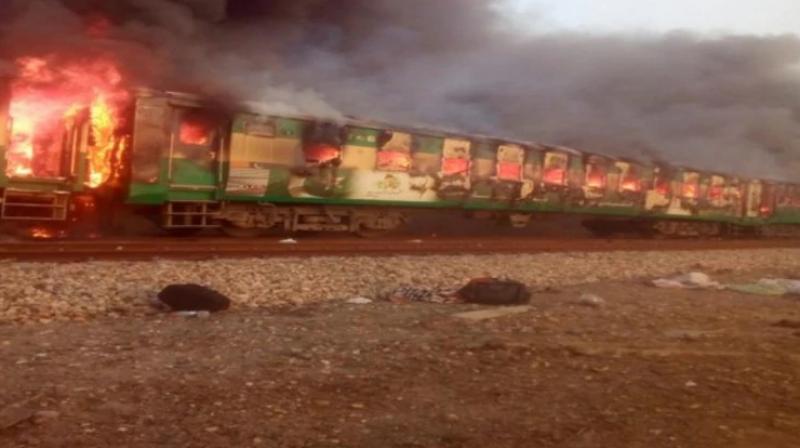 At least 13 people were killed and 30 others injured as a fire broke out on a train in Pakistan on Thursday after a gas canister carried by a passenger exploded. (Photo: ANI)

Islamabad: At least 65 people were killed and dozens wounded after a passenger train erupted in flames in central Pakistan on Thursday, a provincial minister said.

Television footage showed flames pouring out of the carriages as people could be heard crying in the incident near Rahim Yar Khan district in Punjab province.

"According to information reaching us from site of the accident, more than 65 people were killed and over 40 injured," provincial health minister Dr. Yasmin Rashid told AFP.

The wounded were being rushed to hospitals in the nearby city of Bahawalpur and elsewhere in Rahim Yar Khan district, she said, adding that only 18 of the bodies were identifiable.

Local media reported that some of the passengers had been cooking breakfast when the cylinder exploded.

Mazari said the train was the Tezgam, one of Pakistan's oldest and most popular train services, which runs between the garrison city of Rawalpindi, adjacent to Islamabad, and the southern port city of Karachi.

Train accidents are common in Pakistan, where the railways have seen decades of decline due to corruption, mismanagement and lack of investment.

In July, at least 23 people were killed in the same district when a passenger train coming from the eastern city of Lahore rammed into a goods train that had stopped at a crossing.

Prime Minister Imran Khan was elected last year on promises to build an Islamic welfare state but an ongoing economic slowdown and austerity measures have hampered efforts to invest in infrastructure and social programmes.