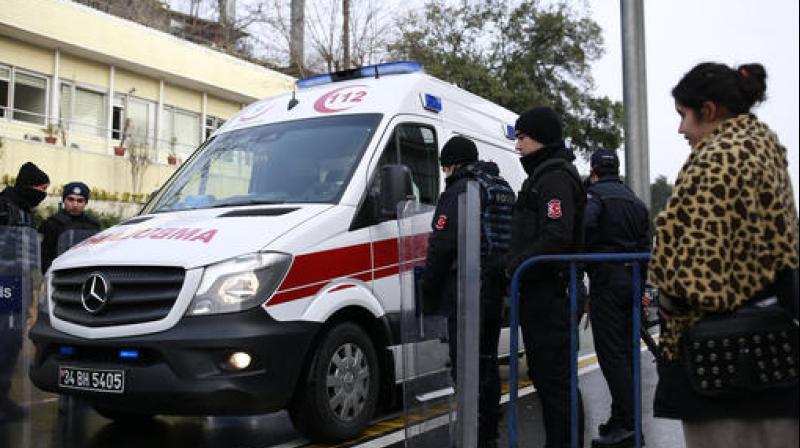 A ambulance believed to carry a victim leaves the area as Turkish police officers block the road leading to the scene of an attack in Istanbul. (Photo: AP)

Istanbul: Two Indians are among 39 people killed in the Istanbul nightclub attack on Sunday during New Year's celebrations. External Affairs Minister Sushma Swaraj confirmed the death of the two Indians.

"I have a bad news from Turkey. We have lost two Indian nationals in the Istanbul attack. Indian Ambassador is on way to Istanbul," External Affairs Minister Sushma Swaraj tweeted.

"The victims are Mr. Abis Rizvi, son of former Rajya Sabha MP and Ms. Khushi Shah from Gujarat," she said.

The Indians are among the foreigners including an 18-year-old Israeli woman and a Belgian national who were killed in the attack in which around 70 others were injured.

Authorities have said 39 people were killed, including at least 15 foreigners, and 65 others wounded. However Turkish officials have yet to give details on nationals of which foreign countries were killed and wounded.

Belgium's foreign ministry has confirmed a Belgian-Turkish dual national was killed in the attack while Paris said three French nationals were injured.

The Israeli foreign ministry said a young Israeli woman was killed and another Israeli wounded.