The whereabouts of the assailant was not known and it was not clear if he had been caught. 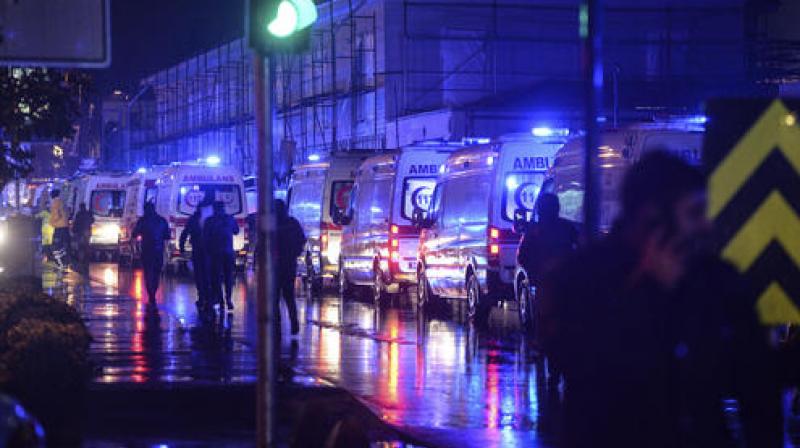 Ambulances are seen near the scene of the attack in Istanbul, on New Year's Day. (Photo: AP)

Istanbul: An assailant believed to have been dressed in a Santa Claus costume opened fire at a crowded nightclub in Istanbul during New Year's celebrations, killing at least 39 people and wounding 40 others in what the province's governor described as a terror attack.

Governor Vasip Sahin said the attacker, armed with a long-barreled weapon, killed a policeman and a civilian outside the club at around 1:45 am (local time) today before entering and firing on people partying inside. He did not say who may have carried out the attack.

"Unfortunately (he) rained bullets in a very cruel and merciless way on innocent people who were there to celebrate New Year's and have fun," Sahin told reporters.

Some customers jumped into the waters of the Bosporus to escape the attack, the report said. NTV television said some of the wounded were foreign nationals, without citing their nationalities.

The whereabouts of the assailant was not known and it was not clear if he had been caught.

Sinem Uyanik was inside the club with her husband who was wounded in the attack.

"Before I could understand what was happening, my husband fell on top me," she said outside Istanbul's Sisli Etfal Hospital. "I had to lift several bodies from top of me before I could get out. It was frightening." Her husband was not in serious condition despite sustaining three wounds.

Police with riot gear and machine guns backed up by armored vehicles blocked the area close to the Reina nightclub, one of the most popular night spots in Istanbul.

The White House condemned what it called a "horrific terrorist attack" and offered US help to Turkey.

White House spokesman Eric Schultz said President Barack Obama was briefed on the attack by his national security team and asked to be updated as the situation developed. Obama is vacationing in Hawaii this week with his family.

"Our thoughts are with victims and their loved ones. We continue to work to prevent these tragedies," European Union foreign policy chief Federica Mogherini tweeted.

An estimated 600 people were celebrating inside the club that is also frequented by famous locals, including singers, actors and sports stars. Several shocked revelers were seen fleeing the scene after the attack and the music fell silent.

The country has been rocked by a series of deadly attacks in 2016 carried out by the Islamic State group or Kurdish militants, killing more than 180 people.

On December 10, a double bomb attack outside soccer stadium, located near the Reina nightclub, killed 44 people and wounded 149 others.

The attack was claimed by Turkey-based Kurdish militant group, the Kurdish Freedom Falcons. Nine days later, an off-duty Turkish riot policeman assassinated Russian Ambassador Andrei Karlov at a photo exhibition in the capital, Ankara. The government has suggested that a movement led US-based Muslim cleric Fethullah Gulen was behind the killing an accusation the cleric has denied.

Justice Minister Bekir Bozdag vowed that Turkey would press ahead with its fight against violent groups.

"Turkey will continue its determined and effective combat to root out terror," Bozdag said on Twitter.

Security measures had been heightened in major Turkish cities, with police barring traffic leading up to key squares in Istanbul and the capital Ankara. In Istanbul, 17,000 police officers were put on duty, some camouflaged as Santa Claus and others as street vendors, Turkey's Anadolu news agency reported.