'We walked on top of people': Istanbul attack witness

At least 35 people were killed when the attacker dressed as Santa Claus opened fire at the elite nightclub. 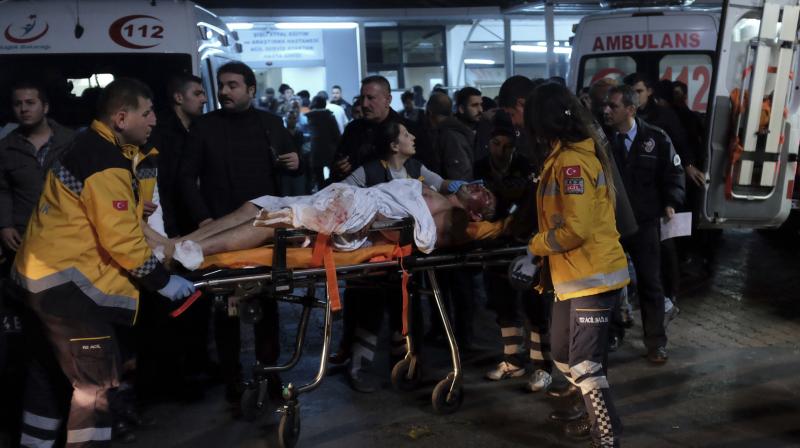 Istanbul: One of the revellers at the Istanbul nightclub which came under attack during New Year celebrations described the chaos and panic as people tried to escape a gunman intent on killing as many as possible.

Thirty-five people were killed when at least one attacker - reportedly dressed as Santa - stormed an elite nightclub on the Bosphorus where party-goers were celebrating New Year.

Professional footballer Sefa Boydas said how several people fainted after they heard  gunshots while people walked on top of one another to escape the elite Reina club on the European side of the city.

Boydas said he had only been in the club with two friends for about 10 minutes before he heard gunshots and his friend collapsed in shock.

"Just as we were settling down, by the door there was a lot of dust and smoke. Gunshots rang out. When those sounds were heard, many girls fainted."

He said that people appeared to be crushed as they ran away from the attacker.

"They say 35 to 40 died but it's probably more because when I was walking, people were walking on top of people," said Boydas, who plays full time for Istanbul club Beylerbeyi SK.

Boydas initially tried to escape holding his friend but upon seeing her older sister faint, the footballer said his friend also passed out.

He described the screams which he said drowned out anything said by the attackers.

"But even if there were shouting, you wouldn't hear because the crowd's screams were 100 times louder," a distressed Boydas added.

He described how the area was full of police, saying that officers came quickly to the scene but kept many at the club for prolonged periods during their investigation.

After a slew of attacks in Turkey in 2016, Boydas said for the first time ever he had feared going out on New Year's Eve.

But while making plans with friends, his fears were dismissed.

"I was hesitant that there could be a fight, something might happen, a bomb. A friend said: 'It wouldn't ever happen in a place like Reina'.

"I said actually the target is places like that. I felt something. I went after the New Year began and it happened 10 minutes after I entered."