An emergency official said the bodies of at least six people had been pulled from the ruins, and at least 20 other people were injured 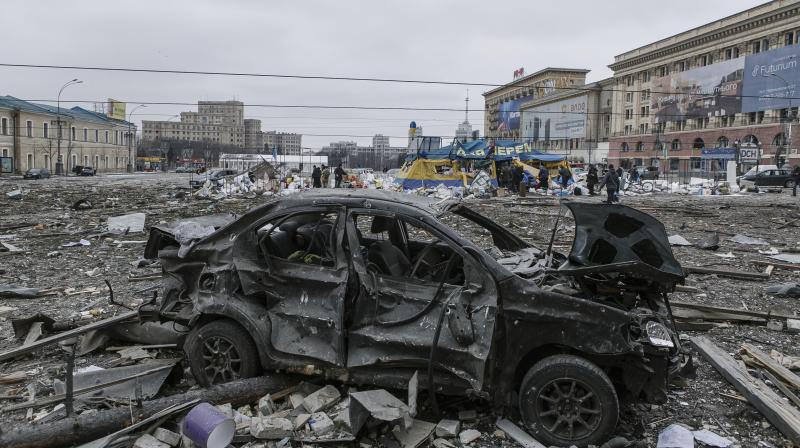 A view of the central square following shelling of the City Hall building in Kharkiv, Ukraine, Tuesday, March 1, 2022. Russia on Tuesday stepped up shelling of Kharkiv, Ukraine's second-largest city, pounding civilian targets there. Casualties mounted and reports emerged that more than 70 Ukrainian soldiers were killed after Russian artillery recently hit a military base in Okhtyrka, a city between Kharkiv and Kyiv, the capital. AP/PTI

Kharkiv: In the dust and debris and the dead in Kharkiv's central Freedom Square, Ukrainians on Tuesday saw what might become of other cities if Russia's invasion isn't countered in time.

Closed-circuit television footage showed a fireball engulfing the street in front of the building, with a few cars continuing to roll out of the billowing smoke.

You cannot watch this without crying, a witness said in a video of the aftermath, verified by The Associated Press.

An emergency official said the bodies of at least six people had been pulled from the ruins, and at least 20 other people were injured.

It wasn't immediately clear what type of weapon was used or how many people were killed, but Ukrainian President Volodymyr Zelenskyy said there were dozens of casualties.

It was the first time the Russian military had hit the center of the city of about 1.5 million people whose residential neighbourhoods have been under fire for days. The Ukrainian emergency service said it had put out 24 fires in and around Kharkiv caused by shelling, and it had disabled 69 explosive devices.

Also struck on Tuesday was a tent site on the central square that had been set up to collect aid for the volunteer Ukrainian fighters who have rushed to Kharkiv's defense.

In recent days, volunteer guards had occupied the regional administration building as part of those efforts.

It was feared that some of the volunteers were now among the dead.

Windows of the administration building were blown out. Ceilings had collapsed. Concrete dust added another layer of grim, gray desperation. A nearby car was crushed.

As emergency responders picked through the debris, there was fresh anger.

This is for those who were waiting for a Russian peace, this is what you wanted, yes? Many injured, one said.

The Russian military has denied targeting civilians, despite abundant evidence of shelling of residential buildings, schools and hospitals.

The military takes all measures to preserve the lives and safety of civilians, Defense Minister Sergei Shoigu said Tuesday.

I would like to stress that strikes are carried out only on military targets and uses exclusively precision weapons.

Unconvinced, one Kharkiv hospital has moved its maternity ward to a bomb shelter, with pregnant women pacing in the gloom. The cries of dozens of newborns echoed off the thick concrete walls. Electrical cables dangled. Rolled-up mattresses were placed against windows.

As the shelling in Kharkiv intensified, one family spent a fifth day in another shelter beneath the city. Water bottles and backpacks were stocked in the basement. A military-style helmet hung on a shelf, and underneath it a boy looked at a phone. Boredom mixed with fear.

It is a nightmare, and it seizes you from the inside very strongly. This cannot be explained with words, mother Ekaterina Babenko said.

She could hardly believe the Russian attack was occurring in Kharkiv and tearing its neighbourhoods apart.

My friend who lives in the suburb Gorizont, a few hours ago, the house next to hers was hit and several floors were destroyed, Babenko said.

And for some time, there was no connection with her. Those were scary minutes, very scary.

For her family and others still sheltering in the city, the world above was changing too quickly to comprehend. Warehouses, homes, garages, cars, all burned.

Sveta, let's go, one man urged in a video showing the shelling of a residential area in Kharkiv on Monday.

Go, I'll catch up with you, the woman.