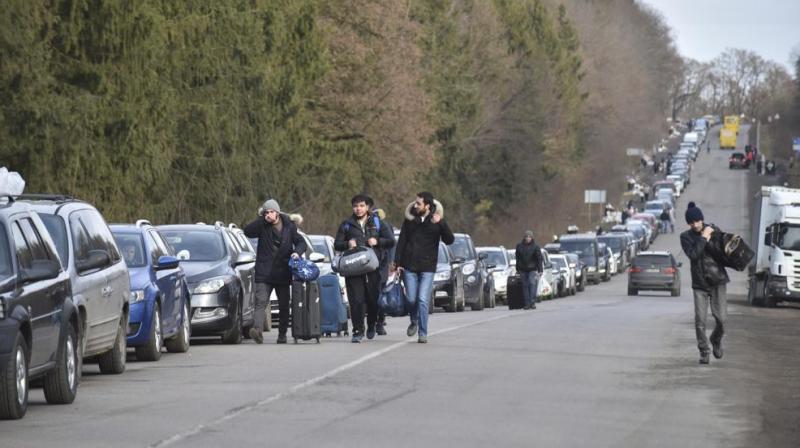 Russia’s invasion of Ukraine entered its sixth day on Tuesday, with a huge convoy of Russian tanks and armored vehicles on a road to the capital, Kyiv, and fighting intensifying there and in other big cities.

Russia shelled several key sites in Kyiv and in the country’s second-largest city, Kharkiv, killing at least 11 people and wounding dozens of others, Ukrainian officials said. Among the sites hit were Kyiv’s main TV tower and Holocaust memorial.

Although Ukrainian forces have slowed Russia’s advance and still control Kharkiv and the coastal cities of Kherson and Mariupol, all three are encircled, according to the U.K. Ministry of Defense.

Meanwhile, extending support to Kyiv in the ongoing Ukraine-Russia conflict, US President Joe Biden has reiterated that his country will not deploy troops in Ukraine against the Russian forces.

Biden's remarks came during the first State of Union address delivered by him to a joint session of Congress at the Capitol on Tuesday (local time).

He further said that the NATO alliance was created to secure peace and stability in Europe after World War II and the US stands with Ukraine in the ongoing conflict.

However, Biden added that the US will not have boots on the ground in the ongoing war.

Here are key things to know about the conflict.

It was the first time the Russian military hit the center of the city of 1.5 million people, though shells have been hitting residential neighborhoods for days.

WHERE IS THAT MASSIVE RUSSIAN CONVOY?

The Russian military convoy threatening Kyiv and its nearly 3 million residents is far bigger than initially thought, with satellite images showing it occupying much of a 40-mile (64-kilometer) stretch of road north of the capital.

The convoy was no more than 17 miles (25 kilometers) from the city center on Monday, according to satellite imagery from the Maxar company.

Russian strikes on Mariupol, a key southern port on the Azov Sea, seriously wounded several people. Separatist forces in Donetsk said they have established two corridors for the evacuation of civilians from Mariupol, which suggests that a large attack on the city could be imminent.

Russian forces have blocked the port city of Kherson, according to Ukrainian officials. And they struck a military base in Okhtyrka over the weekend, killing more than 70 Ukrainian soldiers, the head of the region wrote on Telegram.

The overall death toll from the fighting remains unclear, but the attacks have taken a toll.

U.N. humanitarian coordinator Martin Griffiths said Tuesday that shelling and bombing have damaged pipes, electricity lines and basic services in Ukraine, and that hundreds of thousands of Ukrainian families are without drinking water.

WHAT DOES PUTIN WANT AND HOW ARE NATO ALLIES REACTING?

The United States and European Union have levied sanctions on Russia’s biggest banks and its elite, frozen the assets of the country’s central bank located outside the country, and excluded its financial institutions from the SWIFT bank messaging system — but have largely allowed its oil and natural gas to continue to flow freely to the rest of the world.

U.S. President Joe Biden, in his first State of the Union address, said Tuesday that the United States is closing its airspace to all Russian flights and is working to seize yachts and apartments of Russian oligarchs.

Sanctions experts expect Russia to try to mitigate financial penalties by relying on energy sales and leaning on the country’s reserves in gold and Chinese currency. Putin also is expected to move funds through smaller banks and accounts of elite families not covered by the sanctions, deal in cryptocurrency and rely on Russia’s relationship with China.

With Russia playing such an outsized role in global energy markets as the third-largest oil producer, the International Energy Agency’s 31 member countries agreed Tuesday to release 60 million barrels of oil from their strategic reserves — half of that from the United States — “to send a strong message to oil markets” that supplies won’t fall short due to the invasion.

Canada’s foreign minister, Melanie Joly, said Tuesday that her country will refer Russia to the International Criminal Court for crimes against humanity and war crimes over the Ukraine invasion. The move will speed up an investigation by the court’s top prosecutor.

HOW MANY PEOPLE HAVE FLED UKRAINE?

The U.N. refugee agency said Tuesday that about 660,000 people have fled Ukraine for neighboring countries since the invasion began. Agency spokeswoman Shabia Mantoo said “at this rate, the situation looks set to become Europe’s largest refugee crisis this century.”

WHAT’S HAPPENING TO THE RUSSIAN ECONOMY?

Russia’s central bank has taken drastic steps to prop up the plunging ruble, but foreign investment is plunging.

Oil companies such as BP and Shell have pulled out of their stakes in Russian energy ventures. Norwegian Oil and Gas, an association for oil and supplier companies in the world’s third-largest natural gas exporter, followed suit Tuesday by suspending two Russian companies. And the French energy conglomerate TotalEnergies said it wouldn’t fund any new projects in Russia, but stopped short of abandoning its holdings there. ExxonMobil announced Tuesday it won’t invest in new developments in Russia and will exit the Sakhalin-1 oil and gas project, which it called one of the largest single international direct investments in Russia.

Apple announced that it stopped selling its iPhone and other products in Russia. Other major tech companies have also curtailed their business in Russia.

HOW ELSE IS RUSSIA BEING PUNISHED?

A day after its teams were suspended from all international hockey and soccer matches, including qualifiers for the 2022 World Cup, Russia was barred from competing in international ice skating, skiing, basketball, track and some tennis events.

The decisions by the various sports’ organizing bodies follow the International Olympic Committee’s request to keep Russian athletes out of their events.

The International Skating Union’s decision to ban athletes from Russia and its ally Belarus means Olympic champion Anna Shcherbakova and 15-year-old teammate Kamila Valieva, who was the focus of a still-unresolved doping dispute at last month’s Winter Olympics, will be excluded from this month’s world figure skating championships in France.

The Cannes Film Festival said no Russian delegations would be welcome this year. The Venice festival announced free screenings of a film about the 2014 conflict in Ukraine’s eastern Donbas region.

The European Broadcasting Union announced last week that Russia wouldn’t be allowed to enter this year’s Eurovision Song Contest. On Tuesday, it emerged that the 2016 winner, Ukrainian singer Jamala, fled Ukraine for Turkey with her two children.

WHAT ’S HAPPENING AT THE UNITED NATIONS?

The U.N. General Assembly will vote Wednesday on a resolution demanding that Russia immediately stop using force against Ukraine and withdraw its military from the country, and condemning Moscow’s decision “to increase the readiness of its nuclear forces.”

Also Tuesday, U.S. Secretary of State Antony Blinken called on the U.N.’s top human rights body to hold Russia accountable for the invasion. In recorded remarks delivered to the Human Rights Council, he also urged it to send a message to Putin that he should unconditionally stop the “unprovoked attack” and withdraw his forces from Ukraine.