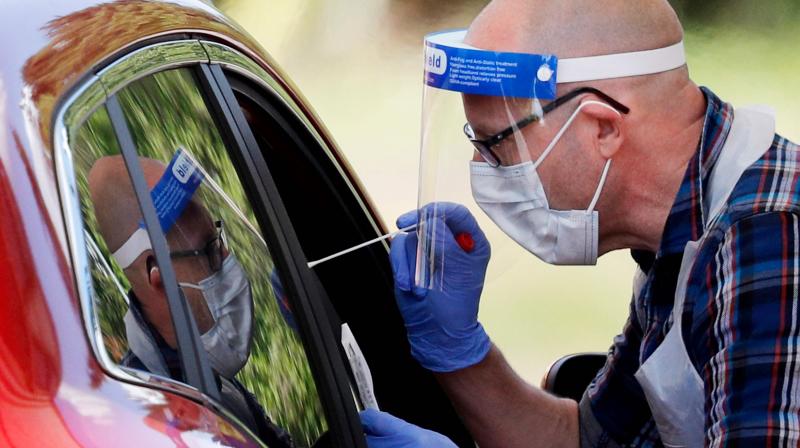 A medical worker takes a swab to test for the novel coronavirus COVID-19 from a visitor to a drive-in testing facility at the Chessington World of Adventures Resort, in Chessington. (AFP)

London: The United Kingdom’s COVID-19 death toll rose by 621 to 28,131 as of May 1, just short of Italy which has so far had the world’s second most deadly outbreak of the disease after the United States.

As Britain shadows Italy for the grim status of being the worst hit country in Europe, Prime Minister Boris Johnson is facing criticism from opposition parties who say his government stumbled in the early stages of the outbreak.

Johnson, 55, initially resisted introducing a lockdown to restrict economic and public activity but changed course when projections showed a quarter of a million people could die.

Johnson himself battled COVID-19 last month, spending three days in intensive care. He returned to work telling the nation that people around the world were looking at the United Kingdom’s “apparent success”.

He has said the country is over the peak but that it is still to early to relax the lockdown he imposed on March 23 because there could be a second peak that he fears might overwhelm hospitals.

The $3.0 trillion British economy, the world’s fifth-largest, is stalling and Johnson is due next week to present a possible way to get the country back to work without triggering a second spike in cases.

He has set five tests that must be met before he can lift the lockdown - with a reduction in the daily death toll and prevention of a second deadly peak among the key ones.

Government scientists say that while the daily death tolls show a downward trend they expect them to plateau for a while.