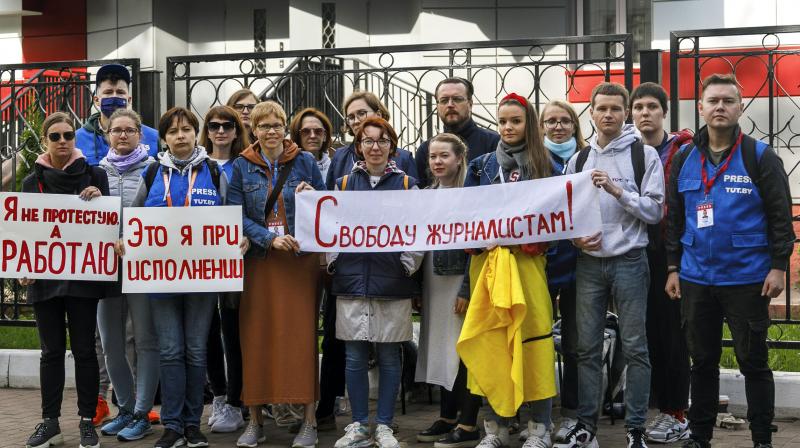 Journalists of Belarusian TUT.BY media outlet hold banners reading "I don't protest but work", "This is me at work", "Freedom for journalists!", from left to right, as they stand in front of police station in Minsk, Belarus. (AP)

Kyiv, Ukraine: Dozens of journalists gathered Wednesday outside a police station in the capital of Belarus to protest the detention of colleagues covering a demonstration against the nation’s authoritarian president and an election the opposition sees as rigged.

Police detained several journalists from Belarusian news outlets Tuesday on charges of taking part in an unsanctioned demonstration. They could receive fines or jail sentences of up to 15 days, if charged and convicted.

“We are witnessing the lawless action of law enforcement agencies, which are muzzling journalists without bothering about methods,” Olga Loiko, a journalist with Belarus’ popular online news outlet tut.by.

On Wednesday, police detained her colleague Vadim Zamirovsky, a photographer with tut.by. He told The Associated Press that he was released after police officers threw him into a van, beat him up and checked his ID and press card.

As it tries to quell weeks of anti-government protests prompted by official results that gave President Alexander Lukashenko a sixth term with 80% of the vote, his government also has revoked the accreditation of many Belarusian journalists and deported some foreign journalists.

Two Moscow-based Associated Press journalists who were covering the protests were deported to Russia on Saturday. In addition, the AP’s Belarusian journalists were told by the government that their press credentials had been revoked.

American and European Union officials have strongly condemned the targeting of media in Belarus.

During Tuesday’s protest, hundreds of students marched across the city, chanting for Lukashenko to “Go away!” as they continued a fourth straight week of mass post-election protests.

The Interior Ministry said 128 people were detained across the country Tuesday for taking part in unsanctioned demonstrations, including 95 in the capital, Minsk. It said Wednesday that 39 of the detainees remained in custody pending court hearings.

More than 100 students of the Minsk State Linguistics University formed a human chain to protest Tuesday’s detentions of students and professors. By Wednesday evening, similar human chains popped up all over Minsk, with hundreds of people joining in to express solidarity with detained protesters.

Lukashenko, who has run the ex-Soviet nation of 9.5 million with an iron fist for 26 years, has dismissed protesters as Western puppets.

During the first few days of post-election protests, police detained nearly 7,000 people and beat hundreds, drawing international outrage. The government has since avoided large-scale violence and sought to end the protests with threats, selective detention of protesters and prosecution of activists.

The United States and the European Union have criticized the Aug. 9 presidential election as neither free nor fair and urged Belarusian authorities to engage in a dialogue with the opposition. Lukashenko has dismissed the West’s input.

U.S. Secretary of State Mike Pompeo said Wednesday that the U.S. and its European partners “are together previewing significant targeted sanctions on anyone involved in human rights abuses and oppression.”

“The Belarusians deserve the right to choose their own leaders through a truly free and fair election under independent observation,” Pompeo told reporters in Washington. “We demand an immediate end to the violence against them and the release of all who are unjustly detained.”

Belarusian prosecutors have opened a criminal probe of the Coordination Council that opposition activists set up after the election to try to negotiate a transition of power. Last week, two of its members were given 10-day jail sentences on charges of staging unsanctioned protests, and several others were summoned for questioning.

Pavel Latushko, a former minister of culture and ambassador to France who joined the council, traveled to Poland Tuesday after facing threats and being questioned. His departure came a day after the Belarusian president warned that Latushko had crossed a “red line” and would face prosecution.

Latushko told The Associated Press that he plans to return to Belarus later this month after attending a conference in Poland and also visiting Lithuania.

“I haven’t violated the law,” he said in a telephone interview from Poland. “The problem is that the constitution and laws no longer work in Belarus. It’s strange to hear the president make charges that can only be made in court.”

Facing Western pressure, Lukashenko has vowed to cement ties with Russia, which has a union treaty with Belarus envisaging close political, economic and military ties. Russian President Vladimir Putin said last week he stands ready to send police to Belarus at Lukashenko’s request if the demonstrations turn violent, but added that there was no need for that yet.

During a visit to Moscow on Wednesday, Belarusian Foreign Minister Vladimir Makei thanked Russia for supporting the Belarusian government in the face of what he described as protests orchestrated from abroad.

Russian Foreign Minister Sergey Lavrov criticized what he described as “destructive” Western criticism of the Belarusian authorities. Asked if Moscow plans to have contacts with the Belarusian opposition, Lavrov said that would not happen until the Coordination Council formulates a platform that conforms with Belarusian law.

He also noted that some council members have spoken against close ties with Russia.